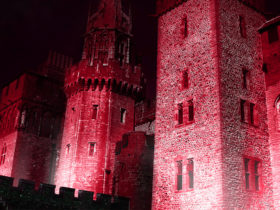 Key Welsh landmarks lit up in honour of life-changing research

Green Man is proud to reveal the full list of Welsh talent that will be at Green Man 2018 (16th – 19th August) including bands, theatre performers, visual artists & brewers.

Tickets are close to completely selling out again this year as the last names heading to the stunning surroundings of the Black Mountains, deep in the heart of the Brecon Beacons, are revealed.

[accordions]
[accordion title=”The Welsh Music Artists” load=”show”]Just announced on the Green Man lineup and headlining the Walled Garden is 9Bach, who promise to bring their beautifully composed Welsh folk music to the Brecon Beacons, also new to the music bill and playing the same stage are the wonderfully psychedelic Welsh trio, HMS Morris. The festival is delighted to welcome back Cate Le Bon to the Brecon Beacons, returning after last year’s performance to dazzle once again with her critically-lauded work, sang in both Welsh and English. Joining the Green Man line up is drum and bass pioneer High Contrast, who’ll bring his melodic beats to the Far Out stage; BBC Radio 1’s Huw Stephens; Cardiff-based Stephen Black, moniker Sweet Baboo will bring his left-field music to the Black Mountains, as well as the debut album from his other incredible new project Group listening; Boy Azooga return to the lineup in the wake of their debut album release ‘1, 2, Kung Fu!’ and quintet Seazoo will bring their upbeat indie-riffs to the Far Out Stage.

Green Man are also delighted to welcome Cardiff’s infamous Clwb ifor Bach on board, who are curating music at the Settlement stage.

Clwb ifor Bach said “We’re showcasing some of our favourite local bands and artists, ranging from Los Blancos’ grungy guitars, to My Name is Ian’s melancholy party anthems, to the power house vocals and gripping lyrics of Marged. We hope to give an insight to some of the very best music Wales has to offer”[/accordion]
[accordion title=”Welsh Visual Art” load=”hide”]Welsh-born artist, Megan Broadmeadow, has also been co-commissioned by Green Man to bring her interdisciplinary artwork SEEK-PRAY-ADVANCE; Episode 2 comprising of installation, video, performance and sound.

This intergalactic-inspired art investigates the human condition of belief, asking if we are really ‘alone’; what about the others that exist within us, the others created by society, the others to whom we must listen and obey?[/accordion]
[accordion title=”Welsh Performing Arts” load=”hide”]Pontypridd’s Citrus Arts will be performing “The Devil & The Deep”. An ambitious, wide-ranging collaboration bringing together students from Bristol’s Circomedia circus school, design students from Cardiff’s Royal Welsh College of Music & Drama, and early-career artists from around Wales to create an original show for Green Man.

Cardiff’s Fio Theatre Company present Resonate to Green Man, which explores the theme of displacement. Fio took four Welsh artists to Mumbai to collaborate with three Indian artists to share their creative practice and produce new work, which will be on display at the Brecon Beacons this summer.

Live action cartoonists Gary and Pel will be mixing dance, slapstick comedy and Tom and Jerry combat to present Car Crash Wedding at this year’s Green Man. Expect wedding bells, chaos and confetti from this south Wales based company.

An incredible cosmological game show extravaganza unfolds from a 1970s caravan spaceship. The aliens from Boubakiki have landed at Green Man! Performed by Cardiff-based Kristoffer Huball, associate artist of the Newbury Corn Exchange Theatre and the 101 Outdoor Arts Creation Space, The Intergalactic Circus of Truths will teach you the mysteries of the multiverse.

South Wales artists Mr and Mrs Clark are regulars on the performance circuit. Using music, dance and a dark slice of comedy they entice the viewer into a world of play and participation that can be both funny and moving. Described as performance mavericks the Clarks were nominated for the Amnesty Freedom of Expression Award for their show Smash It Up.

Cimera is a contemporary circus theatre company from North Wales. A company of many parts, it brings together artists from diverse performance and design traditions to experiment and realise its vision to create a unique artistic voice. It creates work that is powerful, anarchic, comic and dark in both the Welsh and English language.[/accordion]
[accordion title=”The Courtyard – Welsh Beer & Cider Festival” load=”hide”]The Courtyard is its own Welsh beer & cider festival within Green Man Festival, with over 100 independently brewed beers, ales and ciders brought in from all across Wales – there’s a tipple for every palette here![/accordion]
[/accordions]

More than just a music festival, Green Man is built around 10 unique areas, offering enchanting worlds to be explored, taking in late-night revelry and day time relaxation, including a full beer and cider festival, science and discovery areas for the kids, and dedicated film, art, and literature events that run alongside the dazzling display of music.

With early-bird tickets selling out in record time, this year’s festival will be as busy and brilliant as ever-before, welcoming a striking array of talent from all over the globe to our beautiful Welsh home in the heart of the Black Mountains.

Tickets are on general sale now, and having sold out in record time last year, we recommend snapping them up as soon as possible! Also on sale once again is the famous Settler’s Pass, a special ticket which allows early access to the site from Monday 13th August, and includes discounts on local heritage sites, galleries, castles and more, for those wanting the full holiday experience from Green Man 2018. 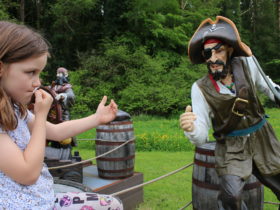