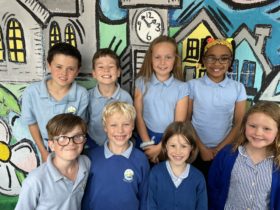 Success for two Gwynedd schools in a national reading competition

RCT Council is pleased to confirm that planning permission has been granted for its major school investment plans at Ffynnon Taf Primary, Cwmlai Primary and Ysgol Gyfun Rhydywaun – which can now all be progressed.

The three applications were considered and approved by the Planning and Development Committee on Thursday, February 25. The schemes will enable the capacity of the respective schools to be increased in response to local demand, while also providing staff and pupils with brand new facilities.

The Council’s application was for a detached extension block including four classrooms and a school hall. This modern building will replace the school’s three temporary classrooms, and will be used permanently alongside the existing Victorian-style building which has recently received interior upgrades.

The scheme will increase the school’s capacity, a requirement due to the  nearby housing developments, and will be delivered via a total investment of more than £3m – utilising a £1m contribution from Welsh Government’s Community Hub Capital Grant, and a contribution from the Community Infrastructure Levy.

The application was recommended for approval by Officers, who noted in a report that it complies with the relevant policies of the Local Development Plan, and that the development would contribute to building strong and sustainable communities while providing improved facilities for the school.

A unique part of this scheme is the Taff’s Well Thermal Spring Heat Network Project, which proposes to use Wales’ only natural thermal spring as a source of low-carbon heat for the heating systems of the new school block.

The new building will provide a new home for the two existing childcare settings, which currently have limited space, in a fit-for-purpose environment. The school also requires expansion to alleviate pressure on facilities – and a flexible space will be provided for use in school hours and after-school clubs.

The application was recommended for approval by Officers, noting that it will provide improved teaching, childcare and physical education facilities.

The Council’s planning application included the demolition of the current caretaker’s house and construction of significant teaching and sports facilities within the grounds of the existing school. These include a new eight-classroom block with community rooms, drama and music facilities, along with a new school reception, sports hall, fitness suite and changing rooms.

The community will also be able to access some of these facilities, with segregation from pupils ensured. A new parking area with 45 additional spaces will be included, along with a cycle store.

The £12.1m plans will benefit from 65% funding from Welsh Government via its 21st Century Schools and Colleges Programme, and will increase Welsh Medium places provided at the school by a total of 187 (from 1,038 to 1,225).

The application was recommended for approval, with Officers noting the increase in capacity, improved school environment, provision of much-needed community facilities and on-site parking to address an existing shortfall. The scale and design of the proposals was also considered to be appropriate.

“The development at Ysgol Gyfun Rhydywaun will also contribute to the outcomes outlined in the Council’s Welsh in Education Strategic Plan – to increase Welsh Medium education in Rhondda Cynon Taf and make a local contribution to Welsh Government’s Cymraeg 2050 vision to achieve one million Welsh speakers across Wales within the next 30 years.

“Meanwhile, the project at Ffynnon Taf Primary is particularly unique as it plans to use Wales’ only natural thermal spring, which is located in the village of Taff’s Well, to heat the new school block. This is an innovative, sustainable process that can’t be replicated anywhere else in Wales, and will contribute towards the Council’s wider Net Zero strategy and climate change targets.

“With full planning permission now granted, the Council can make further progress on all three projects towards their delivery on site. I look forward to seeing this further progress being made in the coming weeks and months.”