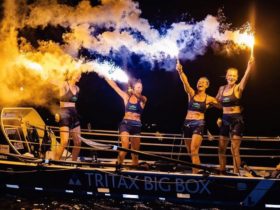 One of the UK’s most respected horseracing historians has written a book to celebrate Ffos Las Racecourse’s 10th anniversary.

Jim Beavis, has detailed the first successful decade of the Trimsaran course with his insightful book, Ffos Las, The Birth of a Racecourse, which is published this month.

Jim has chronicled the history of courses including Brighton, Fontwell, Windsor and Uttoxeter in the past. Now he has told the story of Ffos Las Racecourse, which was the first new National Hunt racecourse to be built in Britain for 80 years, sited at a former open cast mine, back in 2009.

Going from coal to colts might have seemed an unlikely journey back then, when local businessman Dai Walters announced his intentions. But, ten years down the line, and now under the management of Arena Racing Company (ARC), it is an established fixture in the racing calendar, with its impressive natural amphitheatre layout and a unique atmosphere.

Jim said: “Ffos Las was built with an investment of around £20 million, and it was the first new racecourse in Wales since Chepstow was established in 1926. So it was a big event, and I’m sure it has a long and successful history ahead.

“Visiting the course to carry out research for the book, I have noticed the pride that local people have in Ffos Las. Going to Ffos Las is a very distinctly Welsh affair, and I think that makes it all the more precious to local people. You can hear a lot of Welsh speakers at Ffos Las.

“The fact that the Grandstand is named after, and was opened by Welsh Rugby legend Jonathan Davies, who is from Trimsaran, and also worked in the open cast mine upon which Ffos Las is built, speaks to the importance of the course’s local identity.”

In fact, some Ffos Las regulars will have been in the crowd when the official opening ceremony went ahead, with legendary racing commentator Sir Peter O’Sullevan, and with Cerys Matthews performing after the racing.

A Londoner himself, Jim spends much of his leisure time at the courses of the UK. He visited Ffos Las both during busy race-days and has walked the length of its 12-furlong track during its quiet times.

He adds: “I have always been fascinated by the arithmetic of the racing form, and by the fact that race courses have their own unique characters. The horses are always fascinating to watch, and there is, of course, the sporting aspect of race days and the chance to pit your wits against the bookies. If you come out of the day with a profit that’s great, but there is always that sense of common purpose in the crowd – to beat the bookies.

“And people love going to the races because it has a touch of glamour – if you are somewhere like Royal Ascot you can see royals rubbing shoulders with dustmen. Many people are nostalgic for an era when people would go along to the races in hats, gloves and suits and ties. Things have changed a little since then, but on big racing days you still see people really making an effort and dressing up.”

While he might have racing writing down pat, Jim is no expert horseman, admitting only to having been on a horse once, as an adult, when he struggled to dismount in front of a riding class of small children.

“I also own a very small stake in a horse – perhaps a single fetlock. And I did have two winners on my last visit to Ffos Las – the favourite in the last race – I won the princely sum of £8.75.”

“We are honoured that the history of Ffos Las has caught the interest of an authority on the topic of racecourses. The Ffos Las story is still unfolding, and I believe its best days are still ahead, but I’m delighted to see the story so far being documented so expertly, thanks to Jim.”