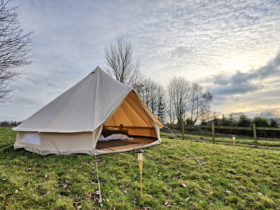 Two experienced Welsh chefs will be on a mission to save their country’s culinary heritage and traditions when they attend the World Heritage Cuisine Summit and Food Festival in India later this year.

Gareth Johns, head chef at The Wynnstay Hotel, Machynlleth and Chris Bason, head of the hospitality business unit at Cambrian Training Company, will be representing the Culinary Association of Wales at the event to be held at Gobindgarh Fort, Amritsar, Punjab from October 11-15.

Their role will be to promote Welsh food traditions and heritage at the event, the first of its kind organised by the Worldchefs’ World Cultural Culinary Heritage Committee.

Worldchefs, which represents more than 12 million chefs from 108 countries around the globe, is concerned that ethnic cuisines and culinary heritage are increasingly in danger of being lost.

“It remains the pivot of community traditions to protect the culinary knowledge bequeathed to us over generations,” said a Worldchefs spokesman. “It is important to safeguard this wealth for posterity to be transmitted from generation to generation.”

Mr Johns, whose only previous visit to India was on a tiger watching expedition, said: “I have always wanted to go back to India, so attending the World Heritage Cuisine Summit will fulfil a long-standing ambition.

“I am proud and honoured to be selected to represent Wales at such an important event. I believe very strongly in being a guardian of culinary traditions because it’s part of our heritage.

“In these busy times, when people are looking for shortcuts, it’s important that we don’t let the old skills die out. I am looking forward to networking with chefs from around the globe and spreading the word about Welsh cuisine.”

It will be Mr Bason’s first visit to India and he can’t wait. “It’s a great honour to be representing Wales and a great opportunity to promote our country’s cuisine. You don’t get this type of opportunity every day to taste food from around the world and watch chefs prepare their national dishes.

“All the chefs will be passionate about their own cuisine and having all the diverse cultures coming together will be quite extraordinary.

“It’s important that we remember the history of our traditional dishes, many of which have evolved over time as chefs give them a modern twist. For example, there are many variations of Welsh cake but they all stem from the same recipe.”