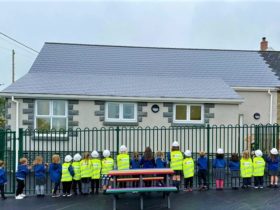 Musical Theatre students at the University of Wales Trinity Saint David (UWTSD) have created an alternative online version of a project they’d planned to perform on stage.

As part of their first year studies, the students had been working on a ‘Musicals Through the Ages’ project but after learning that they wouldn’t be able to perform their end of year project on stage, students on UWTSD’s BA Musical Theatre course set about creating a very different type of performance online.

Under the direction of Musical Director, David Laugharne, the students had been rehearsing a range of pieces from Cole Porter to Disney for over two weeks.  Not wanting to see their hard work go to waste, they decided the record the ensemble performances and release them online, showcasing their incredible talent and highlighting their dedication to the course.  The first of those performances sees the students performing Cole Porter’s ‘Anything Goes’ with the second seeing them sing the Rodgers and Hammerstein classic, ‘Oklahoma!’

“We’d been working so hard on the material and were really looking forward to showing it off to people; showing people what we were able to do so it was nice to come together and to produce the material in a different way,” says first year student, Lauren Cheshire.

“David has been sending us all of the material via email; we’ve been recording it at home; putting on make-up and putting on costumes as if we’re in the show, and then we’ve been sending it back to him.  He’s been working so hard to pull it all together so a big congratulations to him because it sounds really cool!” adds Lauren.

Programme Director, Eilir Owen Griffiths is extremely proud of his students’ resilience and is aiming to release a range of alternative online performances over the next few weeks.

“This is a difficult time, especially for performing arts students, as they can’t have the opportunity to go on stage and complete their final productions in the way we fully intended them to be,” says Eilir.

“Last week, there were meant to be five different shows taking place across the whole department including graduating shows and showcases in London and Cardiff – as well as the first year’s end of level project.  Of course none of them have been able to come to fruition on the stage so we’ve been working hard to try and get as much of this content out on a different platform so that people can at least see some of the work that the students had been working on.  More of these videos will be released over the next few weeks and we look forward to sharing our students’ talent with as many viewers as possible.”

The BA Musical Theatre degree programme is a unique two-year intensive programme which offers practical training that will equip participants in the ‘triple-threat’ disciplines of acting, singing and dancing.

This is the only Musical Theatre undergraduate programme in Wales and all teaching staff are theatre professionals who work in higher education as well as in the industry.