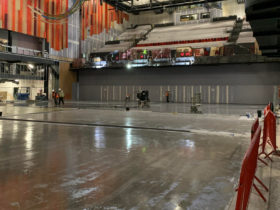 Grand Tour Champion Geraint Thomas has been honoured with an Outstanding Achievement Award at the 2018 Litelok Welsh Cycling Awards where Wales’ cycling community celebrated their success over the last twelve months.

The event took place at the Mercure Hotel in Cardiff. Geraint who was unable to attend the event, accepted the award in a pre recorded link. He said:

“It’s a massive honour to be presented with the Litelok Outstanding Achievement Award, just want to say a quick congratulations to everyone else who has won an award and been nominated tonight”.

The Tour de France winner stormed to victory on the Alpes d’huez stage and went on to win the Grand Tour in the Summer; becoming a Welsh national hero and celebrated with a homecoming event on his return.

Elinor Barker also went head to head with talented riders Jon Mould and Stevie Williams to win the Elite Performer of the Year Award for her consistent high performance and Gold Medal win at the Gold Coast Commonwealth Games earlier in the year.

Elinor is currently preparing for Tissot UCI Track World Cup Series at the end of the month and was unable to attend the event but dad Graham collected the award on her behalf.

Elinor said “I’m really happy and honoured to accept the award and glad my dad could make it to pick the award up!”

The Lifetime Contribution to Cycling in Wales Award was awarded to John Richards of Blaenau Gwent CC, an individual who is known to have been the visionary for the Junior Tour of Wales, a Welsh event that has seen many riders go on to the professional arena.  Richard Hopkins current Junior Tour of Wales organiser invited every Junior Tour of Wales rider in the room onto the stage to celebrate John’s win – over 17 riders including Jon Mould and Stevie Williams took to the stage.

The Awards Winners of the evening

Sweetspot Volunteer of the Year 2018

As well as the presentation to outstanding winners on the night, Welsh Cycling held an auction to celebrate one of the finest winning moments from a Welsh cyclist at the Tour de France.  A Geraint Thomas signed and framed yellow jersey was auctioned with a certificate of authentication along with a Litelok and a Frog Bike signed by Geraint.

Just under £3000 was raised for a new Welsh Cycling Trust that is being developed to support riders who may be restricted due to financial or social circumstances.