What Do You Need to Know About Investing in Healthcare Stocks 2020?

The headline NatWest Wales Business Activity Index – a seasonally adjusted index that measures the month-on-month change in the combined output of the region’s manufacturing and service sectors – registered 46.6 in November, up from 44.1 in October, to signal another monthly decline in output across the Welsh private sector. Although slower than that seen in October, the downturn in activity was linked to ongoing COVID-19 restrictions and lockdowns across the UK. Of the 12 monitored UK areas, Wales registered the second-fastest fall in output (behind Northern Ireland only).

Welsh private sector firms signalled only a marginal fall in new orders during November as the nation emerged from its ‘fire break’ lockdown. Anecdotal evidence suggested that the drop in client demand stemmed from ongoing lockdown measures across the UK and COVID-19 restrictions. The rate of contraction eased from that seen in October and was slightly slower than the UK average.

Private sector firms in Wales registered stronger business confidence in November. Greater output expectations were often linked to hopes of an end to the COVID-19 pandemic and the release of pent-up demand as restrictions are eased. The strong level of positive sentiment was the highest since January and broadly in line with that seen across the UK as a whole.

Welsh private sector firms indicated a further fall in employment in November, despite the rate of job shedding easing for a third successive month. The steep drop in staffing levels was reportedly due to redundancies and efforts to cut costs amid weak client demand. Although sharp, the rate of decline was softer than the UK average.

November data signalled a renewed depletion in the level of outstanding business at Welsh firms. The rate of decline was strong and the sharpest for four months. Panellists often stated that reduced new order inflows had allowed them to work through any incomplete business.

The pace of decrease was among the fastest of the 12 monitored UK regions, slower than only the North East and Scotland.

Welsh private sector firms registered another monthly increase in input costs midway through the fourth quarter. The rate of cost inflation was the steepest for nine months and well above the UK average. Anecdotal evidence linked the increase to greater raw material and supplier prices.

Average output charges at Welsh firms rose only slightly in November as the pace of increase slowed to a five-month low. Where an uptick was reported, companies linked this to the partial pass-through of higher costs to clients. That said, some firms stated that pressure to remain competitive and attract new sales led to subdued price rises.

Also published today, the latest NatWest UK Small Business PMI® survey shows a decline in small firms’ business activity for the second month running in November, with the All-Sector Small Business Activity Index registering at 47.4 (up slightly from 47.0 in October). However, news of a vaccine boosted confidence and business outlook at small firms to a ten-month high. 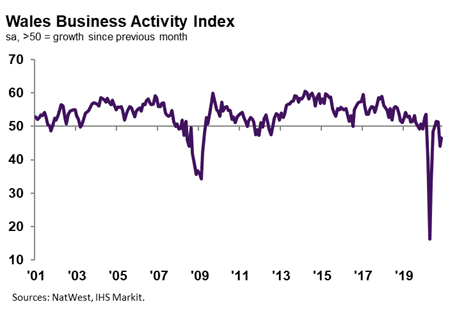 “Activity across the Welsh private sector continued to fall as the nation emerged from the ‘fire-break’ lockdown in November. Additional restrictions reportedly weighed on client demand, as heightened measures across the rest of the UK also dented new order inflows.

“Nevertheless, positive vaccine news, hopes of an end to the pandemic and the release of pent-up demand once restrictions are lifted buoyed companies, as business confidence improved to the highest since January.”