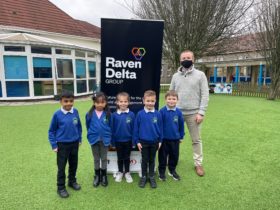 Welsh businesses were amongst the least optimistic in the UK in April despite confidence rising to 22 per cent, according to the latest Business Barometer report from Lloyds Bank Commercial Banking.

Companies across the nation reported higher confidence in their business prospects at 24 per cent, and higher economic optimism at 20 per cent.

Together, this gives an overall confidence of 22 per cent, which   is nine points higher than last month’s figure of 13 per cent.

Companies’ hiring intentions showed that a net balance of 14 per cent of businesses in Wales expect to hire more staff during the next year, down nine points on last month.

Across the nation, a net balance of five per cent of businesses said they felt that the UK’s exit from the European Union was having a negative impact on their expectations for business activity down nine points on a month ago.

Across the UK, overall confidence remained unchanged at 32 per cent, although firms’ confidence in their own business outlook fell five points to 31 per cent.

The Business Barometer questions 1,200 businesses monthly and provides early signals about the UK economic trends both regionally and nationwide.

“Although it’s positive to see that business confidence across Wales has risen, it’s concerning that the nation’s firms are still among the most pessimistic in the UK.

“However, speaking to companies across Wales many remain resilient in the face of uncertainty, and are revisiting their business plans and assessing their working capital to ensure that they can navigate any potential challenges that lie ahead.”

Overall confidence was highest among North West businesses, at 49 per cent, followed by London (43 per cent) and the North East, (34 per cent).

Businesses in the South West were least confident, with an overall confidence of 20 per cent, 12 points below the national average at 32 per cent.

Among different sectors, transport shows the strongest overall confidence (at 56 per cent), followed by communications (47 per cent). The third-strongest industry sector was manufacturing (40 per cent), even though it fell by nine points.

The industry sectors with weakest overall confidence were retail, which fell 12 points to 15 per cent, and health, education and public sector (all at 20 per cent).

“The fact that UK businesses’ economic optimism rose this month, against a backdrop of slightly eroding business prospects, is clearly good news.

“With more than half of firms nationwide more upbeat about the economy than they were at the start of the year, it will be interesting to see if that trend continues to grow as we approach the half way point in 2018.”