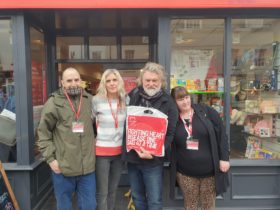 A Welsh football fanatic from Bala whose business keeps alive the memories of the country’s one World Cup Finals appearance has raised £2,500 for NHS charities across Wales.

Tim Williams runs website and Bala High Street shop Spirit of 58, which commemorates Wales’s appearance at the 1958 Finals in Sweden when they reached the quarter-finals before losing to a goal from the 17-year-old Pele.

He also helped design Wrexham Football Club’s newly-unveiled kits with the green away shirt a nod to the club’s history and based on the colour worn by the club from 1904 to 1921.

He has raised the money through the sale of special NHS-themed football memorabilia and from concerts at Welsh internationals in Cardiff which he stages with Alarm frontman Mike Peters.

The 49-year-old was inspired to help the NHS charities including Awyr Las, the charity for the Betsi Cadwaladr University Health Board, by his late father’s three-year battle with cancer.

He said: “My dad, Dei Jeff Williams, was a big football man who played for of Bala Town, Corwen and Nantlle Vale – he played until he was 47 and he was still a fit man when he passed away at 70.

“He fought it for three years and received tremendous care at the Maelor Hospital, in Wrexham, and in Liverpool where he had two operations.

“It’s made me more determined to try and help people and that’s why I have done my charity work and raised almost £40,000 for Welsh charities over the years.”

Tim, who has a three-year-old daughter, Anni Mai, started Spirit of 58 ten years ago and opened his shop a year ago though it has been in lockdown since March and is due to re-open next Friday (July 10).

He said: “I’m a Wales football fan and was due to travel to see them in the European finals this summer but for now I’m trying to make the shop a safe place for the opening.

“It has been my family’s experiences with the NHS that have inspired me and I’ve done very well with the sale of football shirts with Diolch NHS on them and Mike Peters played a gig for us at Clwb Ifor Bach in Cardiff to raise money for NHS charities in Wales.

“I’ve tried to share it out across Wales because my business gets a lot of support from all over the country, especially areas like Wrexham, Gwynedd and the Rhondda.

“We’ve just sent a cheque for £250 for the children’s ward at Ysbyty Bangor and we have donated to all seven local health boards across Wales and sent goodie bags to staff at all seven as well because Spirit of 58 gets support and customers from all over Wales.

“I’ve got a stage behind the Canton Stand at the Cardiff City Stadium and we’ve been doing gigs there at internationals for a few years now and whatever profit we make we donate to charities.”

Kirsty Thomson, head of fundraising for Awyr Las, said: “We’re so grateful for what Tim has done and for the support of people like Mike Peters and from football fans across Wales.

“They have been so generous with their time and their efforts and their support has been phenomenal – no wonder the Welsh football team are doing so well with these people behind them.

“Covid-19 is a difficult fixture but we have a great team at NHS Wales doing everything they can to care and treat patients, and the generosity of these supporters will help Awyr Las and the other Welsh NHS charities make a real difference for patients.” 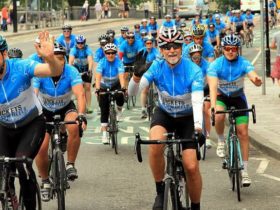