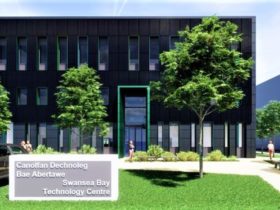 A Welsh-speaking Llandudno Junction man has joined an award-winning house-builder as their new Quantity Surveyor.

Robert Williams, 28, now has to walk just 10 minutes from his front door after being appointed by Beech Developments to join their team.

Robert, who has lived in Llandudno Junction all his life, will now take a lead role at the growing property development firm, helping to manage current projects and assisting the Company with the growth of their contracting arm, alongside the company directors.

Robert said: “I’ve always looked on Beech Developments as a very progressive and forward-thinking developer and I’ve admired their approach to sustainability and new technologies too. I’m excited to be a part of the business at a time when not only brand new developments are starting but the business is also moving forward at pace.”

Robert will be based out of the purpose-built office facility Anson House, Llandudno Junction, beside the other 27 local employees at Beech Developments.

His role will be integral with both the site and in-house teams to help bring efficiencies to the firm, which builds 100+ homes per year, employing dozens of local tradesmen.

Robert said: “Beech Developments are one of the few firms in the area building very smart looking homes that have a real appeal across the market. It’s proof there is a real demand for this type of good quality, highly sustainable homes in North Wales by how quickly they get sold.”

Following his start at Ysgol y Creuddyn, he went on to complete a two-year foundation degree in Civil Engineering at Coleg Llandrillo.

Robert started his career in the construction industry seven years ago as a trainee Quantity Surveyor.

Whilst working full time, Robert also studied part-time at Liverpool John Moores University where he achieved a 2:1 in Quantity Surveying.

He added: “For me, it really was the best way to learn and it taught me so much about what the actual practicalities of being a QS were in the real world.”

Robert hopes to be able to progress and begin his Assessment of Professional Competence (APC) to become a chartered member of the Royal Institute of Chartered Surveyors (RICS).

Matthew Gilmartin, Managing Director at Beech Developments, said: “We are delighted that Rob has joined us to be part of our expanding team. Rob has many years of experience and is well respected in the industry.  Rob’s role is key to expanding our contracting arm of the business moving forward.  He will be assisting the construction team and will be working to secure future collaboration agreements with Registered Social Landlords to deliver much needed affordable homes across North Wales as part of our growth plans.”

Aside from his passion for all things construction, in his spare time avid football fan Robert is usually either watching his beloved Liverpool FC or out walking in Snowdonia National Park with his Labrador dog Harley.

“I’m very proud to come from North Wales – it’s such a beautiful part of the world and now to be working for Beech Developments, a company that is not only Welsh, but so progressive in its approach and so close to home, is a real honour,” added Robert. “I can’t wait to get started!”