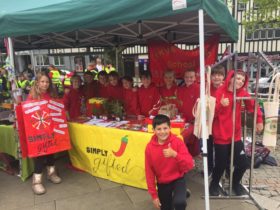 The event, which was postponed three times due to Covid, was attended by many famous faces, and was hosted by TV presenter Gethin Jones.

The ceremony was brimming with emotions as the audience listened to the incredible stories of the extraordinary feats the winners had achieved. The winners included young fundraisers Emily and Holly Walker who has raised over £170k in memory of their brother Tom who sadly passed away due to Acute Myeloid Leukaemia. Debbie Walker (mum) said “the evening allowed us to celebrate not just Emily and Holly, but Tom too and his legacy, it was an unforgettable and inspirational evening”

Another 12 young people were recognised from those who Champion causes in their communities to a young sporting hero Lily Rice who is the first person in Europe to do a back flip in a wheelchair.

“The evening was a truly humbling experience. As a parent myself, to see what some of the children had been through – and continue to go through – shows the huge courage and strength they have, and each and every one of them can be proud

“They are a credit to their families and a credit to Wales. It was brilliant for us as a football club to be part of such a fantastic night.”

Strictly Star Ian Waite was a guest, and winner Ffion Gwyther who kept her community entertained during lockdown donning fun fancy dress such as a nun, Carmen Miranda and Cruella Devil, enjoyed a dance at the end of the evening with him. A video message to Ffion from Michael Sheen was also played.

The Child of Wales Choir of 50 youngsters from Mark Jermin Stage School opened the awards and were pleased to sing live after not being in front of an audience for over 2 years due to Covid. Guests were also treated to performances from Eva Ossei-Gerning a semi-finalist on The Voice Kids UK, and Claire Jones and Chris Marshall – Deuos who performed with the winner of The Young Performer’s award, Cerys Angharad – a dedicated harpist. Cerys was bullied at school for her love of music which resulted in her having to move schools. “Who’s Molly?” a Welsh indie band ended the night with guests dancing to midnight.

The winners of the awards

£50,000 was also raised on the night for charities Dreams and Wishes, Teenage Cancer Trust, NSPCC and Bluestone Wales who donated their funds to the Red Cross for the Ukraine Disaster.

“I never imagined just how much this idea would take off and be supported by businesses and the public, we were overwhelmed by the nominations. My thanks to all our sponsors who supported us, an evening dedicated to the triumphs and successes of young people across Wales is just what is needed”