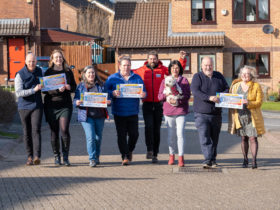 RCT Council has started work to improve a series of pedestrian crossings and extend traffic calming measures in Ton Pentre – as part of a Safe Routes in Communities Scheme funded by Welsh Government.

The scheme started on Wednesday, February 23,and will focus on several locations near Ton Pentre Junior School, with the appointed contractor Horan Construction Ltd delivering the scheme over the next two months.

The scheme will include construction of a new zebra crossing and traffic calming measures, extending the existing 20mph speed limit along Maindy Road to also encompass both Maindy Crescent and Maindy Croft. In addition, a raised junction will replace the current mini roundabout on Church Road in order to reduce the speed of through traffic. Pedestrian crossing facilities on Church Road will also be improved, helping to create a safer environment.

The majority of the work associated with the scheme will be carried out while maintaining a two-way flow of traffic, but some side streets will be closed with diversions in place. Final resurfacing work will also be carried out under a full closure, which will be scheduled on a weekend to minimise disruption. The Council will keep local residents informed in advance of any road closure.

Councillor Andrew Morgan, Leader of Rhondda Cynon Taf Council and Cabinet Member with responsibility for Highways and Transportation, said: “The Council has started a Safe Routes in Communities Scheme in Ton Pentre, having welcomed a full funding contribution from Welsh Government. This Scheme aims to increase safety and accessibility for pedestrians and cyclists in communities – and the work in Ton Pentre follows projects in Llantrisant and Cilfynydd last year, also supported by Welsh Government.

“These followed similar Council projects to increase road safety and promote walking and cycling in Llwynypia and Abercynon in 2020 – along with a series of safer routes schemes delivered in conjunction with 21st Century Schools improvements in Cwmaman, Tonypandy, Tonyrefail and Treorchy in 2018/19.

“The upcoming work in Ton Pentre will deliver a new formal crossing point, extend an existing 20mph zone, replace a mini roundabout with a raised junction, and deliver other traffic calming measures and pedestrian crossing facilities – with these safety improvements all in close proximity a local school.

“The Council will work closely with its contractor to deliver the programme as quickly and efficiently as possible, with the majority of the works activity able to be completed without traffic management. Thanks to the community in advance for your cooperation while we deliver this community scheme.”