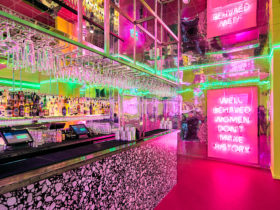 A North Wales bakery is going back to the future after planting and harvesting 50 acres of retro wheat.
The Village Bakery will be using the flour milled from the wheat to bake a new range of speciality bread to be launched in the Autumn.

The crop was grown at a secret location in Flintshire.

They planted Hereward wheat which was popular in the 1970s and 80s but has now fallen out of fashion with scientists developing other varieties with a higher yield.

The idea is the brainchild of Village Bakery managing director Robin Jones and it’s all being filmed so customers will be able to watch a video of the whole process.

The sourdough culture for the new range will include honey from hives kept on the heather-clad slopes of Ruabon Mountain by his father, Alan, who is a beekeeper as well as being chairman of the family firm.
The wheat is being milled by Rank Hovis in Manchester.

The new range will be baked at the company’s state of the art bakery on Wrexham Industrial Estate.
If the pilot is successful the bakery is aiming to plant 200 acres of the Hereward wheat next year.
Robin Jones explained:

“We are very proud of our heritage as craft bakers and these skills are at the heart of everything we do at the Village Bakery.
“So, we are going back to our roots by planting the Hereward wheat which was famed for its wonderful taste.
“It was extremely popular in the 1970s and 80s but was largely superseded by newer, high yield modified wheats.
“We had a chat about how we could create a new signature range of loaves which was like the wonderful bread I remember when I was growing up.
“By using the Hereward wheat we are going back to future to get a better tasting loaf.
“The main ingredient of bread is flour so in a sense the answer suggested itself.
“The inspiration for this was Dad who pioneered the idea of local sourcing in the 1990s, long before it became fashionable.
“You can’t get much more local than wheat grown in Flintshire and heather honey from Dad’s eight hives on Ruabon Mountain.
“The whole aim of it is to improve the quality of our bread, the provenance, the local sourcing side of things, and it’s a Welsh first.
“It’s Welsh wheat with great provenance, grown in Wales, baked in Wales and sold in North Wales.
“After it was harvested, the wheat was taken from the field direct to the mill in bespoke lorries. The grain is going to be milled but we’re not going to adulterate it in any way. Then we’ll start using it in our slow dough which is our method of getting flavour into our bread.
“We started the sourdough culture around eight months ago and we used Dad’s honey to provide the sugars and extra taste.
“The speciality range we’re launching in the Autumn will be totally unique to the Village Bakery.
“In year one we will be making white bread and if it goes well we will be planting 200 acres next year and then we will also bake wholemeal bread with it.
“Our belief is that this old-fashioned wheat can give us the very special taste that we are looking for.”
“I can’t wait to taste the new bread, it’s all very exciting.” 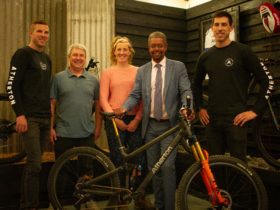