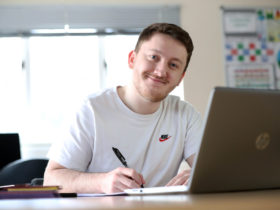 Katie Malone (21) from Wrexham is the first dancer from Wales to perform on the legendary stage of the world’s most famous cabaret!

After her successful audition in Paris last April, Katie has packed her bags and headed to the famous Moulin Rouge at the foot of Montmartre to join the cast of 80 artists who come from 16 different countries (dancers from the UK are the second most represented nationality).

At a very young age, she enrolled in Manchester’s Northern Ballet School. She invested herself to the point of earning the Level 6 diploma and the BA Hons Degree in Professional practice, arts and creative industries in Dance. Before coming to France’s capital, she performed for the first time at Butlins, a large holiday resort in the United Kingdom. Her favourite thing about dancing is the creativity it implies.

Her flawless dance technique, her size, her charisma on stage and her professionalism has caught the eyes of Janet Pharaoh, Moulin Rouge Company Manager (from Leeds) and enabled this young talent to become a Moulin Rouge showgirl!

After four intensive weeks of rehearsal sessions to learn all the choreographies and master the French Cancan, Katie is now performing twice a night, at 9pm and 11pm in the current show “Féerie”!

Created in 1889, the Moulin Rouge will celebrate this year its 133rd anniversary! “Féerie” is a spectacular 2 hour-long show featuring 1000 costumes of feathers, rhinestones and sequins, sumptuous settings in shimmering colours, original music and the famous French Cancan… An outstanding show which welcomes over 600.000 spectators every year from all around the world!