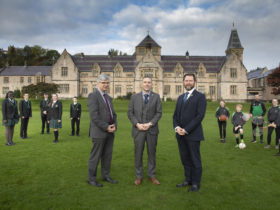 An aspiring golfer continued his impressive recent run of results with a regional tournament success.

Richard Wolfendale, a Year 10 pupil at Rydal Penrhos, was part of a large contingent that competed for the Simon Robertson Trophy at North Wales Golf Club in Llandudno earlier this month.

The 14-year-old produced a number of impressive shots throughout the round, also demonstrated his fantastic progression on the putting surface to finish on 92 as a result of his efforts.

This resulted in a final score of 67 in accordance with his handicap, which saw the Golf Academy member triumph by one stroke over Ben Barton to secure the title.

Richard has progressed a considerable amount thanks to the sterling work he is putting in with the Academy, which has gone from strength-to-strength in recent months thanks to the commitment shown by Rydal Penrhos’ dedicated coaching staff led by programme co-ordinator Ian Richardson.

The pupil has enjoyed a superb campaign to date, with his ISGA Northern Open nett title victory in the U15 category the undoubted highlight.

“This is further proof of just how much Richard is developing his game with our Golf Academy programme, and it is great to see his hard work paying off with another tournament win.

“Mr Richardson is doing some incredible work with the Academy here at Rydal Penrhos, and it has been a significant addition to our overall sporting programme since its inception.”