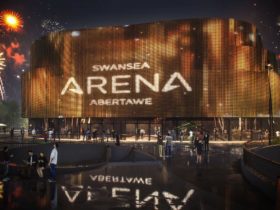 Welsh schoolchildren and budding rap stars are being given the chance to show off their rhymes for a hip hop competition that can be entered from home, launched to coincide with 2021’s Welsh Language Music Day – Dydd Miwsig Cymru.

Wales and the world will celebrate the sixth annual Welsh Language Music Day – Dydd Miwsig Cymru – on Friday 5thFebruary 2021, with a range of materials- from playlists to lyric explainers- set to be made available to help parents and grandparents learn Welsh with their children through music.

Dydd Miwsig Cymru aims to inspire people who don’t speak the language to embrace the vibrant Welsh language music scene, and those that do to discover more of the amazing range of music made in Welsh.

Ysgol Hip Hop is a fun and rewarding way for parents and grandparents to join in with their children’s journey with the language, offering a creative and educational activity to be completed from home that will not only keep children entertained but aid their learning.

The competition asks primary school children to write a verse of a rap song with a parent, guardian or grandparent and practice during home lesson time. Organisers behind Dydd Miwsig Cymru hope non-Welsh speaking parents could benefit from learning the words too. Teachers are also being encouraged to use the lesson plan materials available through Dydd Miwsig Cymru to set their pupils the rap challenge while they’re learning from home.

Dydd Miwsig Cymru has provided an online toolkit which will help pupils create their rap, including a top tip videos and an example chorus from Welsh beat-boxer, rapper and producer Mr Phormula. The winning pupil will win £250 for their school to spend on educational resources and will have their rap played on S4C’s Stwnsh Sadwrn.

Each pupil will need to record a performance of their rap song on a smartphone and email it to Dydd Miwsig Cymru before Friday 29th January 2021 to be included in the judging. Teacher, parents and guardians should visit gov.wales/welsh-language-music-day/ysgol-hip-hop for details of where to send it and full T&Cs.

Mr Phormula, real name Ed Holden, is lending his musical guidance to the budding rap stars for the Ysgol Hip Hop competition said: “Music has the power to bring people together. Lyrics can not only capture the imagination of music fans but, in the case of Welsh language music, can be used as a way of learning a language or adding to the vocabulary you already know.

“It’s been a challenging year for performers, but I’m confident the creativity and imagination of young people in Wales will result in some amazing raps to put a smile on everyone’s face.”

In a year in which gigs, festivals and concerts were cancelled due to the coronavirus, Welsh language music has still celebrated some exciting new releases from Georgia Ruth, Breichiau Hir, Eädyth and Band Pres Llareggub.

In February of this year, the fifth Welsh Language Music Day saw Carmarthenshire three-piece Adwaith take to the stage at the British Music Experience in the UNESCO City of Music Liverpool, while thousands of people of all ages experienced live Welsh music at events from Bangor to Budapest. The campaign reached over 90 million people.

Eluned Morgan, the Minister for Mental Health, Wellbeing and Welsh Language, said: “Welsh-medium education continues to grow, but using Welsh outside of the classroom is so important to the future of the language. With children learning from home currently, it’s vital those that don’t come from a Welsh speaking household are using the language as much as possible when they’re not in a classroom environment. Welsh language music is a powerful tool to enable children and parents to immerse themselves in the language, even from home. This year we want to use Dydd Miwsig Cymru to bring parents, guardians and grandparents closer to their child’s Welsh language world in a fun and accessible way.

“Music knows no boundaries and although this year’s Dydd Miwsig Cymru will look different to other years, we know the event will help people across Wales and internationally discover the many incredible artists performing in Welsh.”

Previously businesses including Marks & Spencer, KFC, Co-op and BT have all shown support to Welsh Language Music Day, from hosting gigs in store, to playing only Welsh language music in branches on the day, to sharing Welsh language music playlists to their thousands of followers on social media.

To take part in Ysgol Hip Hop, head to gov.wales/welsh-language-music-day/ysgol-hip-hop to access the information.