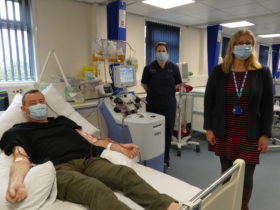 Creative works by young Swansea schoolchildren are on public show alongside pieces by a globally celebrated artist.

Pupils of city schools painted white shirts with colourful interpretations of their future dreams – and thousands of art lovers are now set to enjoy them.

The shirts hang in the city centre Glynn Vivian Art Gallery in a major show by NS Harsha, a past winner of the prestigious Artes Mundi arts prize.

“It’s great that Swansea children have been inspired by a top class artist – and it’s wonderful to see their works hung alongside his.

“This is a NS Harsha’s largest UK solo exhibition to date so is a real coup for the Glynn Vivian.

“It comes to Swansea in partnership with Artes Mundi which helps position the city as Wales’ capital of culture.”

The show, called Facing, takes place in several spaces across the city centre gallery and runs all summer.

The children’s element of the show is called Future, a collaborative project which saw the young people attend gallery workshops and imagine their future dreams by decorating over-sized shirts into which they will theoretically grow.

The exhibition includes NS Harsha works from between 2010 and the present.

One of the most significant Indian artists of his generation, Harsha is inspired by Indian and Western painting traditions. His diverse output includes paintings, works on paper, wall and floor works and sculptures. He explores the relationship between the local and the global.

Born in 1969, NS Harsha lives and works in Mysore, southern India. His work has been exhibited internationally at major exhibitions and events.

His Glynn Vivian exhibition opened on July 6 and continues until September 9. A series of free events, workshops and art festival days will be held during the exhibition.