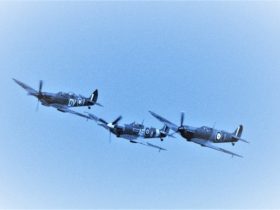 Wales and the Battle of Britain Exhibition to visit Port Talbot

The Man Engine made its first appearance in Cardiff at the final weekend of the Volvo Ocean Race stopover.

The amazing mechanical puppet, honours the history and the stories of all of the Welsh miners over the centuries and was one of the event’s highlights at the Cardiff Stopover.

Earlier this year, The Man Engine toured the UK, bypassing Cardiff on its way to Swansea and Pontypridd. So, the event was the perfect opportunity to see project in all its glory if you hadn’t already seen it.

What is a man engine?

The Man Engine project takes its name from the mechanism of reciprocating ladders and stationary platforms, which were installed in mines to save the exhausting journeys that miners make between to and from working levels.

The Man Engine project is a tribute to the miners at Levant mine, who lost their lives more than 100 years ago when their man engine platform collapsed, killing 31 men.

This is what you thought about the The Man Engine appearance in Cardiff:

People were taken back by it all…

@TheManEngine what a creation! Loved meeting the man engine as he made his Cardiff debut at the #VolvoOceanRace pic.twitter.com/cFfbrT49i5

It came to life before your eyes…

It was simply amazing…

This is awesome. Man Engine @volvooceanrace in Cardiff Bay. pic.twitter.com/omqSwxJR2d

We couldn’t fault the glorious weather either…