More than 60 companies and organisations were represented at the Denbighshire County Council March for Business event, held at the OpTIC Technology Centre in St Asaph.

Chaired by Ashley Rogers, the forum was an opportunity for firms of all sizes to discover how they can benefit from the imminent Growth Deal, which is being driven by North Wales Economic Ambition Board.

Mr Rogers, a member of the Ambition Board and chair of North Wales Mersey Dee (NWMD) Business Council, said the projects earmarked for development would have a major impact on the region’s economy.

Those words were echoed by Iwan Trefor Jones, Corporate Director of Gwynedd County Council, who said the Ambition Board is in discussions over further funding from both the Welsh and UK Governments in addition to the £240m commitment received last year.

“The capital funding from both governments will act as a lever for around £1bn of investment into the region as part of the Growth Deal,” said Mr Jones.

“Coming together as the Ambition Board has enabled us to achieve far more than we would have as six separate local authorities – that ‘Team North Wales’ position has been crucial and successful.

“We have become one voice that can knock on the door in London and Cardiff and fight the corner of this region, showing that we can make a difference.”

He added: “The Growth Deal itself is just part of the wider Growth Vision for North Wales, so we urge all of you here today to engage with us and see how you can support us and we can help you to resolve the issues and challenges you face in business.

“North Wales is special, North Wales is somewhere we all believe in, so let’s take this Vision forward together.”
The event also included presentations from organisations leading projects that form the Growth Deal; they included the proposed Renewable Energy and Digital Precision Technology Centre at Coleg Cambria Llysfasi; Digital Connectivity; North Wales Tourism and Hospitality Centre of Excellence at Coleg Llandrillo; the Enterprise Engineering and Optics Centre in St Asaph; Land and Property Development, and Smart Local Energy.
Denbighshire’s leader Cllr Hugh Evans thanked the companies in attendance for the contribution they make to the county in creating jobs and boosting the economy.

“March for Business is based on what you told us you wanted, what you want and need from us as an authority supporting business,” said Cllr Evans.

“We know our economy is not just based within the boundary of Denbighshire, and the Growth Deal is a key part of it going forward.

“The North Wales Economic Ambition Board is vital to the prosperity of the region; we want to see how you can benefit from the projects that will form the Growth Deal and how we can help you to grow and expand and cater for your ambition.

Machynlleth woman with Parkinson’s in daredevil stunt for charity 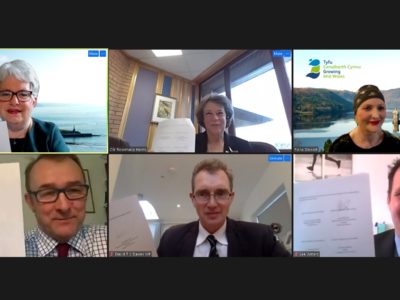