Lord Mayor of Cardiff raises over £200k for children’s charity

On Sunday 29 March 2020, Dilys Price OBE, the 87-year-old world record breaking skydiver, Jamie Jewitt from ITV’s Love Island and members of the public will jump out of a plane in Swansea for leading homelessness and rough sleeping charity, The Wallich.

Jamie was dared by his Love Island co-star Camilla Thurlow to make the jump for homelessness. Camilla said via Instagram on Sunday, “Last year, some of you may know I was lucky enough to do a skydive with Dilys Price, the most amazing woman.

“We were chatting earlier this year about the amazing work she’d doing with The Wallich, which is a homelessness charity in Wales. They work with over 9,000 people and what they’re doing is incredible.

“Basically, I’ve challenged Jamie to do a skydive with Dilys for The Wallich.”

After accepting the challenge, despite a fear of heights, Jamie and Dilys will be tandem jumping 12,000 feet out of plane with professionals at Skydive Swansea.

Dilys is from Cardiff and received a special recognition from the Pride of Britain Awards in 2017. She began her skydiving career at the age of 54; at 81, she gained the Guinness World Record as the oldest woman skydiver. By 2017, Dilys had completed 1,139 solo skydives. Dilys will be doing a tandem jump with her team of The Wallich divers to raise awareness of rising homelessness.

Dilys said, “I believe we have two instincts: one for survival and one for service. I think that we are only truly happy when we give expression to both and embracing it is the way forward in creating a good community.

“I always say, ‘Go at life like a tsunami of Love.’ Altruism and kindness is so important to help those that need us. We go to the gym for our bodies to build our muscles, but kindness is a spiritual muscle and it too must be exercised.”

Joining Jamie and Dilys in the air, the team of brave skydivers are aiming to raise around £2,500 for The Wallich, which will fund help and support for a growing number of people experiencing homelessness in Wales.

According to UK Government statistics, rough sleeping across the UK has risen 165% between 2010 and 2019. The Wallich works with more than 9,000 people every year who are homeless or vulnerably housed across Wales. As well as helping people secure their housing, the charity also works to address issues with budgeting, welfare, mental health, substance misuse and employability to end their homelessness for good.

Mike Cowley, senior fundraising and partnerships manager at The Wallich, said, “Homelessness is undeniably more noticeable on our streets, up and down the country. It’s fantastic to see people with such a huge platform using their influence to do something about it. At The Wallich, we believe that we all have a responsibility to end this national homelessness emergency. We can’t thank Dilys, Camilla and Jamie enough for putting a megaphone to the cause.”

16-year-old Bethan, who will be taking part her first skydive on the day, said, “I cannot wait to skydive with Dilys and Jamie. My family have always called me a daredevil as ever since I was little I would be on the biggest rollercoaster holding the biggest snakes and dancing (badly) on a stage in front of 100s of people.

“A skydive is something I’ve always wanted to do and I thought I’d have to wait until my 18th birthday. When I made friends with Dilys at a murder mystery night for The Wallich and got told that I could do it two years early, I was very excited. I can’t wait to tell my children and grandchildren about this in the future and make my family proud.”

Camilla and Jamie appeared on ITV’s Love Island in 2017 and have done extensive humanitarian and charity work. Camilla is an explosive ordnance disposal specialist and activist for The HALO Trust which clears landmines and other explosives in countries after conflict. Working with Indigo Volunteers and Help Refugees, Jamie and Camilla also visited Greece in 2017 to volunteer in refugee camps. 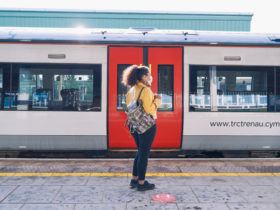