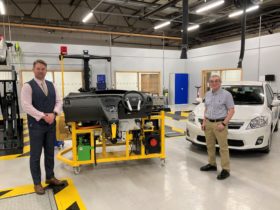 Hard work and determination has seen a learner from Porth overcome the challenges brought by Attention Deficit Hyperactivity Disorder (ADHD) and win the country’s top apprenticeship award for manufacturing and engineering.

Coleg y Cymoedd learner, Jamie Jones, has been presented with the Apprentice Endeavour Award by the judges of the Wales Manufacturing Awards 2020, who recognised the fortitude and resilience he’d applied throughout his apprenticeship programme with Llantrisant-based design and manufacture company, FSG Tool and Die Ltd.

The annual Wales Manufacturing Awards are held by the national manufacturing organisation, Make UK, with the aim of recognising and celebrating the best in the manufacturing industry. The Apprentice Endeavour Award is designed to champion the up and coming talents of the industry and celebrate their commitment and progress building careers in industry.

Jamie, 19, from Porth, initially joined Coleg y Cymoedd to study engineering where his keen interest in machining gained him an apprenticeship with Llantrisant based company, FSG Tool and Die. Having spent three years at the college’s Rhondda and Nantgarw campuses, he has now obtained his Level 2 and Level VRQ diploma in Engineering. However, his journey was not a smooth one, having struggled to settle in with his studies due to the challenges of ADHD.

Talking about his experience and the challenges he’d had to overcome during his studies, Jamie said: “I had a hard time during my studies initially and it was quite a dark time for me. Recently, I’ve been diagnosed with ADHD, which means that I find it more difficult than others to stay focused in class.”

Despite the hurdles he faced in achieving his qualifications, Jamie showed his perseverance and is set to complete his apprenticeship next year. His hard work and perseverance to gain his diplomas in engineering did not go unnoticed by the team at FSG Tool and Die, who nominated him for the Apprentice Endeavour Award.

Jamie added: “Winning the award came as a shock to me as I wasn’t expecting it at all. However, I’m really happy to have been given an award that recognises and appreciates the hard work I’ve put in. Coleg y Cymoedd and FSG Tool and Die have been incredibly supportive, and I’m eager to keep on developing my skills and knowledge in engineering.”

Jamie’s achievement has also been praised by his tutors at Coleg y Cymoedd. Matthew Wilmington, Engineering tutor at the college’s Nantgarw campus, said: “Jamie studied in our Nantgarw campus for his final year, where he took a little time to settle into his new surroundings. However, he continued to work hard and was always active and positive in classroom and workshop discussions.

“Myself and Jamie’s other tutors are very proud of him for such an amazing achievement. It truly does show what hard work can achieve.”

As a regional Apprentice Endeavour Award winner, Jamie has progressed to the national round of the Make UK Manufacturing Awards 2020 where he hopes to bring home a national winning title set to be announced early next year.