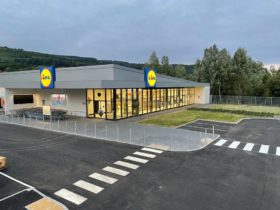 Barry lottery winner Matthew Evans (37) celebrated a National Lottery milestone today with the delivery of a millionaire worthy gold playstation to the shop where he bought his winning Lotto ticket.

Since the first draw on 19 November 1994, The National Lottery has now created an amazing 5,000 millionaires and the last 1,000 have been made in just 29 months, at the rate of more than one every day.

In Matthew’s CF postcode district National Lottery luck is booming. In total, 96 millionaires have been created and 641 prizes of £50,000 or more have been paid out to those lucky winners, including football fanatic, Matt, who scooped £2.6m on a Lotto Jackpot in 2015.

He bought the £2.6M winning Lotto ticket at One Stop on Plas Cleddau in Barry.

Returning to the same shop three years later, right before he popped on a plane for a sunny holiday, Matthew revealed the limited-edition gold playstation to surprised shoppers.

Giving it his own stamp of approval with a gold handprint, the winning lad from Barry wrote a message of luck to all future players directly onto the gold playstation.

“Winning the lottery has been a life-changing experience. I have been able to look after my family and really enjoy my life, including taking my dad to several sporting events abroad,

“I’m hoping that this gold playstation will bring a little bit of extra luck to Barry players so our millionaires club can grow even bigger and more people can enjoy their lives to the full. Lots of people jokingly ask me to rub their ticket for luck, now everyone can rub my lucky handprint instead!”

One Stop Shop manager, Graham Dando, and shift manager, Yvonne Sinetto – who was the one who scanned Matthew’s winning ticket – were happy to see Matthew again and thanked him for his ongoing support.

“It’s amazing to think there are now 5,000 lottery millionaires who have all enjoyed that same winning moment as Matthew, a moment which for many starts at the National Lottery playstation in their local shop! We are thrilled to have the new playstation and for Matthew to reveal it is great. We are so proud of him and winning the lottery couldn’t have happened to a nicer person.”

“It is great to be one of the stores that created a millionaire and to know we were part of changing someone’s life. It is an achievement and is a great thing for the shop. We hope that the new gold playstation will bring us even more luck so we can create more millionaires in the CF postcode area!”

“The winners team here at Camelot travel the length and breadth of the country paying out lucky winners every day.  It is no surprise to me to see how lucky the CF postcode has been and I’m sure I’ll be back there soon with another giant cheque.”

Contrary to popular wisdom National Lottery millionaires have declared that the best thing about their win isn’t the lifestyle it buys you, but rather the happiness felt from sharing the cash with others.

Research reveals that gifting to friends, family and charity remains the top priority for winners, with almost half declaring that it is the sharing of the win that has given them the most happiness. These gifts include cash, holidays, cars and houses, but in another sign of the win benefitting others for years to come, for a fifth it now means helping others with university fees.

This gifting means that the 5,000 millionaires have created an astonishing 1,750 further millionaires by sharing their windfall.  And National Lottery wins are now also starting to support future generations.  In all 57% of winners will make their child or children a millionaire and 36% believe they will make their grandchildren millionaires in the future.

Andy said, “After the shock and excitement nearly all winners first question how they can look after their nearest and dearest.  In many cases this seems to bring winners even greater joy than thinking about how they can treat themselves.

“I see first-hand the effect a win can have on the circle of people close to a winner, and this always reminds me that at heart we are a nation that is kind and generous.”

What would the people of Wales do with £1M?

A survey has revealed that Wales is the region most likely to invest in a new home following a big Lotto win with 69% of respondents opting for the big move. The regional percentage in Wales is also the highest with those wishing to design and build their own home from scratch (37%) with 31% wishing to buy a country house with land. This was certainly the case for Matt who bought a sprawling country pad in the Vale of Glamorgan, which was one of the properties he used to visit daily on his post round. The lifelong Bluebird soon installed a near full sized pitch in his back garden too!

44% said house hunting – or building – would be the first thing they’d do following their windfall with a beautiful view, a swimming pool and a large landscaped garden topping their list of new home must-haves.

Houses and swimming pools aside, it is clear that it wouldn’t just be the winner who would benefit in Wales.  An impressive 55% admit that would help out friends and family and 48 % would be tempted to make family millionaires, with on average nearly 5 extra millionaires made for each win.

They would also prioritise experience and travel over possessions luxury items.  In Wales 64% would look to life enhancing events over and above the 11% who value materialistic items.