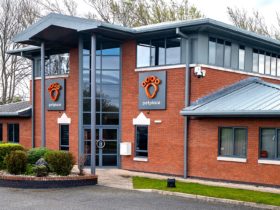 The move marks a major first step forward for both LIGNIA and TDS, as it promotes the first real wood alternative to Burmese teak in yacht decking. The joint distribution agreement is for North America and the Caribbean and was signed at this year’s METSTRADE Show, at which LIGNIA was an exhibitor.

Based in Sarasota, Florida, TDS is one of the world’s oldest, largest and most prestigious yacht and cruise liner decking manufacturers. The company supplies the Yachting and Cruise industries with over 125,000ft² (11,600m²) of decks annually – the equivalent of four to five 164′ (50m) custom yachts per month. Customers include owners of small private yachts, high volume production boat builders, custom yacht builders, boatyards, major shipyards and cruise lines around the world.

The two companies have already been working together for a number of years, with TDS helping to test LIGNIA Yacht in some of the harshest environments in the world. The product – a world first – is a natural, modified timber which matches, and in some cases exceeds, Burmese teak in performance and visual beauty.

LIGNIA’s patent-pending manufacturing process involves taking sustainably-sourced, FSC softwood and modifying it into high performance timber with all the best attributes of a hardwood. It is also enhanced to include greater durability against rot, with improved stability, density and hardness, while retaining a rich, golden-brown colour similar to Burmese teak.

“TDS is one of the biggest and best-known companies in the marine world, so this is naturally hugely exciting for us. We have developed a deep partnership with the team and are very confident that this relationship will continue to revolutionise the industry. It has been very clear to us from all of our discussions at METSTRADE that the supply of Burmese teak for yacht decking is not sustainable and our work with TDS will help to deliver a real wood alternative to yacht brands that is hard-wearing, beautiful, legal and sustainable.”

“We’ve had a productive partnership with LIGNIA for over five years in product development and are truly excited to be the first official partner for LIGNIA Wood Company. We look forward to working with Steve and the team in delivering sustainable solutions for the marine industry.”