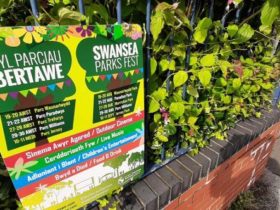 14 trees installed on Castle Street as part of the Castle Quarter Café have been permanently replanted in a Cardiff park.

The ornamental Callery Pear trees have been used to create a tree lined avenue in Hamadryad Park in Butetown, an area that currently has some of the lowest tree canopy coverage in Cardiff
An additional four trees will be added to the avenue during National Tree Planting week, which runs from 28th November.

National Tree Planting week marks the start of the Council’s annual tree planting programme, which this year, with the help of funding from Cardiff Civic Society and Trees for Cities, will see approximately 150 heavy standard trees planted in the city’s streets and parks.

1,000 trees are also being planted at school sites to mark the launch of the council’s One Planet Cardiff strategy, and a further 1,000 trees will be planted in and around Cardiff’s nature reserves and woodlands.

Cabinet Member for Culture and Leisure, Cllr Peter Bradbury said: “When the temporary arrangements on Castle Street came to an end we were keen to ensure that new, permanent homes were found for the trees.

“This new avenue of trees creates will provide an attractive addition to the park, but more importantly it’s also a small step towards achieving the aim we recently announced as part of our One Planet Cardiff Strategy responding to the climate emergency, of increasing tree canopy coverage in Cardiff to 25% by 2030.

“Since the start of the 2017 tree planting season we’ve planted more than 3,000 trees in and around Cardiff, this year we’re planting more than 2,000 and our intention is to plant many more as we drive Cardiff towards being a carbon neutral city by 2030.”