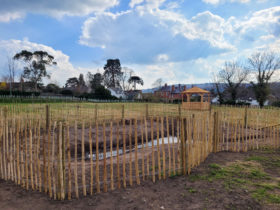 The Minister was welcomed (Thursday) by Cambria’s Chief Executive David Jones and Alex Thomas, Head of the revolutionary Deeside complex.

Ms Williams AM paid tribute to staff at the centre for achieving a staggering overall pass rate of 98% (A-E) during the summer with their very first A level cohort.

She was impressed with the cutting-edge facilities – including a product design suite with 3D printer and laser technology, a dance studio, science labs and a music centre and terrace – and the standard of learning support and teaching achieved since being opened two years ago by First Minister of Wales, Carwyn Jones.
Ms Williams said:

“Coleg Cambria’s reputation for excellence continues to grow with world-class facilities, supported by our 21st Century Schools programme, and an exemplary overall pass-rate at A-level.

“So much progress has been achieved at Deeside Sixth Form Centre in a relatively short space of time and this really is testament to the hard work of students and lecturers as well as a clear sense of direction and purpose about what the Centre wants to achieve.”

The Minister was given a tour of the building by students Jess Aindow and Lewis Morrin and enjoyed a drama workshop, before taking in Chemistry and Art lessons.

She was also given an overview of how the centre had been jointly developed by Coleg Cambria, local schools and Flintshire County Council by John Clutton, Chair of Governors at Cambria, Deputy Chair, Ray Wells, Flintshire’s Cabinet Member for Education and Chairman of the Deeside 6th Partnership Board, Councillor Ian Roberts, and Claire Homard, Chief Officer for Education and Youth.

Thanking the Cabinet Secretary for her visit, Mr Jones said it was heartening she had experienced first-hand the state-of-the-art facilities and identified the progress made in just two years.

“It was great to have the Minister with us today and for us to be able to demonstrate the huge strides we have made as a college since the sixth form centre opened, but also as we celebrate five years of Coleg Cambria,” he said.

“The technological advances we have made and the equipment and buildings we have here at the centre are as good, if not better, than anything you will find elsewhere in the UK.

“And as our A level results showed, it’s not just about the surroundings it’s about the people; our students and lecturers are the very best, we are proud of them and delighted that Ms Williams had the opportunity to witness that herself today.”