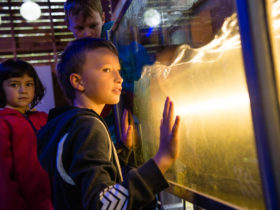 Things to do in Mid Wales during February half term

The Felin Fach Griffin near Brecon has been named Dining Pub of the Year for Wales in the 37th edition of the Good Pub Guide which is published on today.

The dining pub with rooms retains its crown from the 2018 edition of the guide. The Griffin, hosted by Julie Bell, is a seven bedroom inn at the foot of the Brecon Beacons, owned since 2000 by brothers Charles and Edmund Inkin through their company EATDRINKSLEEP.

It has a thriving restaurant and bar that is a base for the community, supporting local producers, brewers and growers, as well as having its own kitchen garden.

It follows the brothers’ belief in “the simple things done well”, a philosophy which was developed during their dairy farming childhood in neighbouring Monmouthshire.

The Inkin brothers also own two sister inns in Cornwall, The Gurnard’s Head, near St Ives and The Old Coastguard, an iconic seaside hotel in nearby Mousehole.  Both have recently been awarded gold awards in the annual Taste of the West hospitality awards and both achieve bedroom occupancy levels of nearly 95% year-round.  The group now employs more than 120 people in Wales and in Cornwall.

The 2019 Good Pub Guide said of The Felin Fach Griffin:

Responding to the award, Edmund Inkin said: “Merely being included in the Good Pub Guide is important to us.  So, to win one of its awards is always a huge reward for our people who work with us at The Griffin.

“It recognises the work of all of the team over the whole year but I’m particularly happy for recent arrivals in the team, including our new head chef, Rollo Mason.”