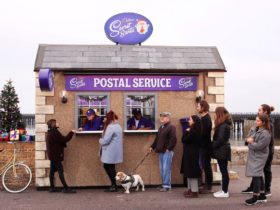 Thanks to the National Museum Cardiff for the tickets in exchange for this review.

The film screening is one of many special events that the museum is hosting in the Reardon Smith Lecture Theatre. However, I must say that this is more of an experience than a simple film showing.

The entrance was beautifully decorated in a winter wonderland theme, with the theatre itself lit up with falling snowflakes. If you haven’t been to this theatre before, it has its own separate access located to the side of the museum along Park Place.

As a wheelchair user, it wasn’t immediately clear on the best way to access the theatre. However, after going around the back of the museum, I found a suitable way in without steps. This entrance led to the very top of the lecture theatre, which had an area for a few wheelchair users.

We were greeted by cheery helpful staff, pretty lights and trees. A box of popcorn is also included in the ticket price (approx. £6 each). The staff also offered to help carry these over to our seats, which was very thoughtful. We were given white fluffy snowballs too, which they said to keep for a surprise at the end.

They made it really cosy, with blue lights to add a cool cold effect. The projected falling snow on the sides, as well as Christmas music playing, made it very festive.

The popcorn proved to be popular, with theatregoers digging in throughout. Overall they created a lovely place to watch the film. There were plenty of giggles from the children, especially when the cat is scared of the snowman and when the snowman makes fruit faces. Some children even stood up and put their arms out for ‘Walking in the Air’ and pretended to fly.

Following the film, there was a snowball fight, much to the delight of the audience. You were also given the opportunity to meet the snowman for a photo opportunity. This was a nice touch and added to the overall experience. This was definitely a hit with children and adults alike!

I love that the National Museum Cardiff is hosting more of these special events. It makes it even more exciting to go along to the museum. Museum entry is of course free, with some events requiring ticket purchases.

Find out what’s on at the National Museum Cardiff by visiting their website. 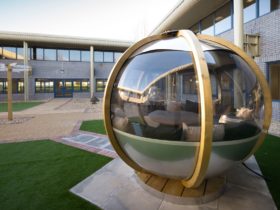