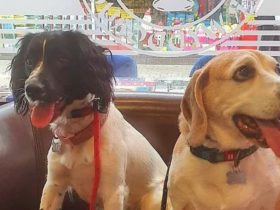 An inspirational S4C fitness expert, whose weight soared after suffering serious post-birth complications, is helping others fight back to fitness after shedding six stone.

Rae Carpenter, who has featured in FFIT Cymru which is due to air its finale Tuesday night, is helping others to conquer their diet and exercise demons through the show after transforming her own life.

The 40-year-old turned to exercise to help her lose weight following the traumatic birth of her son in 2003.

Mrs Carpenter’s son was left fighting for his life in intensive care while she also suffered abdominal complications which left her unable to exercise.

This stress, combined with postnatal anxieties, saw her gain almost six stone in just 12 months, taking her from a 10 to a 16 dress size.

“I was a very fit and a healthy size 10 just weeks before my son was born. But in his first year, due to health and post-natal anxiety issues, I ballooned to a size 16.

“I stayed that way for four years. I tried on and off fad diets during that time looking for the quick fix weight loss miracle that never happened.

“Then one morning, after a visit to my chiropractor, I decided enough was enough. It was time to stop making excuses and do it properly if I wanted to live the life I wanted to live. So I started that day.”

After embarking on a healthier and more active lifestyle, the fitness trainer admits there were challenging times but credits positive thinking and setting realistic goals with her enduring success.

“I took each day as a step, then those days became a week, then a week became a month, and then there was no way I was undoing all that commitment to making me better.

“I also decided to make exercising non-negotiable, meaning that I would have to prioritise it during my week and not let anything interfere with that. It had to be like this to ensure I could succeed and to show others how important this was to me.”

Thanks to her continued weight-loss success Mrs Carpenter qualified as a fitness trainer three years ago in a bid to support others who are attempting to transform their lives.

“I know how isolating and lonely it can feel when you are taking on something like this, so I wanted to help others who may have felt they were on their own in getting their health and fitness on the right path.”

Her own experiences also mean that she can fully empathise with the personal sacrifices, commitment, and determination shown by the five leaders in the current S4C series, which is due to air its final episode on June 5.

“Having been through this I know there are tough days, tough workouts, mental blocks, injuries, and temptations. I didn’t have anyone to guide me through those moments. So it was so important to me that I could be there for our leaders.

“Having been through this personally, and now being able to really help these people, is incredibly rewarding.

“It’s not only satisfying to see the physical changes in someone else’s transformation- but also the personal victories such as no longer needing medication, improving relationships, getting pregnant naturally, and finding the confidence to apply for their dream job.

“It’s a lot more than just training people. It’s why I do what I do. It’s why I choose to help others to love the life they live.”

Thanks to her guidance the five leaders taking part in this series – Nic Davies, Leon Welsby, Judith Owen, Mathew Thomas, and Catherine Lewis – have discovered a new lease of life after shedding almost 10 stone between them in just eight weeks.

The final episode of FFIT Cymru airs at 8pm on Tuesday night on S4C where the leaders’ final weights will be revealed. If you are interested in taking part in the next series of FFIT Cymru, follow the @ffitcymru pages on Twitter, Facebook and Instagram to keep up to date throughout the summer.