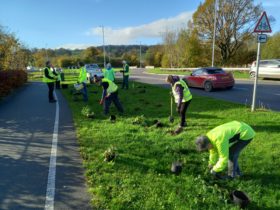 Hafod Renewables, based in the Vale of Clwyd, were presented with their award by actor James Nesbitt at the Energy Efficiency Awards, the renewables industry ‘Oscars’ at the National Exhibition Centre in Birmingham.

The event, which was compered by BBC Breakfast and Football Focus presenter Dan Walker, saw the business, founded in 2010 by former Holywell High School pupil David Jones, 34, short-listed in two categories at the prestigious event.

They were named with winners the Perth-based McDermott Group, a major construction and maintenance company, and Clima-Tech Services, from Suffolk.

David set the business up in Denbigh in 2010 and has overseen its move this year to new, larger premises in Tremeirchion, complete with renewable energy systems and vehicle charging points, and success at the national awards was the icing on the cake.

He said: “It was the third time in a row that we’ve reached the national finals and the second time in succession we’ve been top three so we’re delighted.

“This is the industry Oscars so you’re up against the best in the renewables business from across the UK so they’re all experts in their field and most of them are much bigger than we are so to be able to compete with them is a real feather in our cap.

“It’s also a real opportunity to network and to speak to people within the industry because those connections can be really important.

“We work with some of the biggest suppliers in the market and it’s important to be able to keep abreast with the latest developments and that’s what has enabled us to be successful.

“We partner with many of those big names like Tesla, Daikin and Mitsubishi as well as Jewsons for whom we provide renewable systems training for their staff and because we can design bespoke systems for our clients we often consult with the manufacturers on equipment.

“We recently worked with the world’s leading supplier of dairy equipment, Cotswold, to design and install a unique hot water tank at a major dairy farm to help them cope with a big expansion of their herd.”

Hafod’s successful award submission was based on a track record of installing over 100 RHI systems in 12 months including over 70 air source heat pumps including one to provide underfloor heating to keep abandoned dogs warm at the North Clwyd Animal Rescue charity’s kennels near Holywell.

They have also put in over 30 ground-source heat systems include one over 1,000 feet up on the Hiraethog Moors for a 16,000-hen egg farm and another 300 feet below the surface to heat a North Wales Wildlife Trust property on Anglesey.

Hafod Renewables now employ 11 staff and has become a key player in North Wales in the installation of solar and non-solar systems such as air and ground-source heating and biomass.

Since they began in July 2010 they have fitted over 300 bespoke renewable heating systems and last year this sector grew to overtake solar power so that RHI now makes up almost 80 per cent of the £1.5 million turnover business.

In those eight years they have also fitted over 10,000 solar panels, including at more than 100 farms including Kilford Farm, near Denbigh, where 370 dairy cows produce 4,500 litres from each milking which has to be cooled and stored 3 to 5 degrees C in a giant tank to await collection and after each milking session the 300 feet of pipes have to be sluiced clean with a tankful of water heated, by electricity, to 85C.

Gary Braybrooke, Chief Executive of the Energy Efficiency Association, said: “Hafod might be a small firm compared with some of the big names and the big operations they’re rubbing shoulders with at the awards but they punch way above their weight.

“They combine the personal service and attention to detail of a local business with the range of skills and expertise of a big company and they continue to be successful because of their professionalism, their customer care and their ability to tailor each system to the needs of the client whether that is a homeowner or even a railway like the Talyllyn in Snowdonia.

“They have the ability to design and deliver bespoke systems to an outstanding standard which is supported by so many testimonials provided by satisfied customers and by the high quality suppliers they use.”