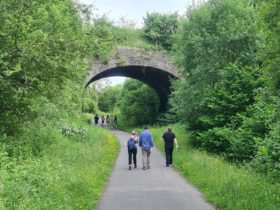 The new service was officially launched (on Frinday, June 11) during a live broadcast in Aberdare by the Mayor of Rhondda Cynon Taf, Councillor Jill Bonetto.

Although the station had always included Cynon Valley local news and information in its programmes, the reception of its Pontypridd signal was patchy due to intervening hills.  But now the station can be heard on 100.7 & 107.1FM across the valley, including Aberdare and Mountain Ash, with reception dovetailing with its original coverage on 107.9FM in the Abercynon area.

GTFM was established in 1999 by the Glyntaff Tennants and Residents Association in Pontypridd as a community project working with local radio enthusiasts. In 2001 it was one of just 15 groups across the UK, the only one in Wales, to be selected to take part in an initial 12-month project., organised via the Radio Authority, to see if it was feasible to set up ‘Access Radio’ on a permanent basis.

This scheme allowed GTFM to commence full-time broadcasting and since those early days, the radio station has gone from strength-to-strength. It is now registered charity and has been on air full-time for 19 years.

Councillor Jill Bonetto, Mayor of Rhondda Cynon Taf, said: “The last year has been one of the most difficult for everyone, especially during the height of the global pandemic when tight restrictions were in place affecting us all  and the vast majority of people not even leaving their homes unless it was an absolute necessity.

“It was at this time, many people turned to their radios more than ever before, and it was lovely to hear familiar voices coming over the airwaves, in between the great music of course.

“GTFM was one of those radio stations, the one most local to us all in Rhondda Cynon Taf, where we have all come to recognise the voices of the presenters.

“I am therefore delighted to help launch the new radio transmitters, which extends the station’s coverage into the Cynon Valley. GTFM provides an amazing community service, which both informs and entertains its listeners.”

GTFM’s Chairman of Trustees, Colin Dixon, said: “Ofcom’s decision to award an extension to our coverage to officially include the Cynon Valley will allow us to provide cost-effective radio advertising to more local businesses and a platform for community groups and charities to promote their amazing work across a much wider area.”

GTFM Station Manager Terry Mann, said: “I’m delighted we are finally on-air with a clear signal. We’ve always included Cynon Valley news and information in our programmes, so now a lot more people have the opportunity to hear and participate in our inclusive and interactive community service”.

Singer-songwriter Ragsy, also a GTFM volunteer, performed live at the launch in his hometown of Aberdare.

Later this year, GTFM aims to also boost its FM reception in the Ynyshir/Porth and Tonyrefail areas, with a step into digital (DAB) broadcasting planned for next year.