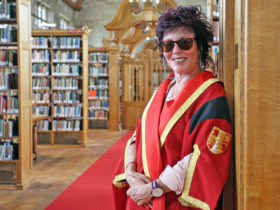 The head of one of Wales’s oldest law firms has taken over a legal post that dates back over a thousand years to the days of Alfred the Great and Ethelred the Unready.

Sarah Noton, of leading law firm Swayne Johnson, who have a base in St Asaph and branches across North Wales and Cheshire, is the new Undersheriff of Clwyd, the voluntary legal officer for the Shrievalty of Clwyd – comprising Conwy, Denbighshire, Flintshire and Wrexham.

Until two years ago her powers would have included the authority to raise a posse to pursue criminals but the office is now to act as the legal adviser and representative of the High Sheriff of Clwyd, Lady Hanmer, who appointed her.

“It’s a great honour for me and for Swayne Johnson who have never had an Undersheriff before even though our history goes back to 1853.

“The position is generally held by a solicitor and is a continuity role that can be for as long as you want and is appointed every year by the incoming High Sheriff.

“My duties are to give the High Sheriff advice on legal matters and to present the Queen’s Warrant appointing the High Sheriff and make sure the statutory obligations of the Sheriff’s Act of 1887 are complied with.

“I also have to wear a rather impressive formal outfit but there is more to the job than dressing up.

“I have been the apprentice’ Undersheriff for about a year and it’s been a steep learning curve but I have already met many interesting people from all walks of life and it promises to be a very rewarding role.”

The High Sheriff is the Queen’s representative in the county and is confirmed in office in the Pricking Ceremony carried out each year by the Monarch who uses a silver bodkin or needle to signify the chosen candidate for each county on the list provided for her before signing it.

It is known as Pricking the Lites, lites meaning list, and dates back to the reign of Elizabeth I who, finding she didn’t have a pen, used her needle instead to mark the chosen name.

In Flintshire the first recorded High Sheriff was Robert De Praers in 1331, appointed by Edward III, while the first in Denbighshire was John Salusbury of Lleweni, Denbigh, chosen by Henry VIII in 1540.

Sarah, 54, married with two children, lives near St Asaph, and has been with Swayne Johnson for 21 Years and has seen the firm, founded in 1853 but with connections back to the early 19th century, grow to six offices and 53 staff.

She said: “Being Managing Director of Swayne Johnson is a full time occupation but it doesn’t prevent me contributing to the local Community through this voluntary role. We encourage all of our staff to take an active role in the communities in which we live and operate as that keeps us true to our core values.”

As Undersheriff she will also be on the board of Crimebeat, the youth crime prevention charity of the High Sheriffs Association, which works with young people across the area of Clwyd to help improve their local areas.

She added: “That’s an exciting role because Crimebeat forms a link between the Queen, the courts, the law and the police and it means I can play a part in the excellent work it does here in North East Wales to help young people improve their communities.

“It aims to cut local crime and keep young people out of trouble, support victims of crime, encourage an interest in voluntary work and it also offers cash support for positive projects.”