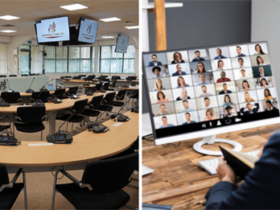 This week (11th July) a class from Christ the King Catholic Primary School in Llanishen were invited by their local group of station adopters to join them in caring for Llanishen train station as part of Arriva Trains Wales’ ‘Adopt a Station’ scheme.

The class were excited to join Tony Fundell and members of Llanishen Rotary Club to learn about the kind-hearted work that station adopters are doing for their communities. The children were given a talk by Tony about what his work involves, before putting what they had learnt into action as they tidied up any litter and watered the flowers in the station gardens.

Arriva’s ‘Adopt a Station’ scheme was launched nationally in 2004 and invites community-spirited volunteers from across the country to adopt their local unstaffed stations by way of maintaining station grounds and providing feedback to Arriva.

Station adopters are responsible for upholding the appearance of the station and its facilities by creating floral displays, picking up litter, and reporting any graffiti or vandalism to Arriva. Passing on feedback from their local communities about any timetabling issues has also proven an important aspect of their work, as they facilitate a link between Arriva and their customers.

Rotarian Tony Fundell, station adopter at Llanishen station in Cardiff, said: “We’ve been station adopters at Llanishen for two years and it’s a great way to keep busy and make friends; plus, we love seeing the positive feedback we get from customers passing through the station as a result of our hard work. To think that we are now able to share our work with the local schools in our community is a real joy, and the students really enjoyed helping out.”

Geraint Morgan, Community Relations Manager for Arriva Trains Wales, said: “Our ‘Adopt a Station’ scheme encourages both individuals and groups to keep active while doing something positive for their community.

“Having the students from Christ the King Primary School join the team at Llanishen was a great way of teaching the students some gardening skills while uniting the local community. We are so pleased with the response we’ve had from our ‘Adopt a Station’ scheme so far and hope that this positivity continues to spread.”

Sue Miles, School Teacher from Christ the King Catholic Primary School, said: ‘Our class have had a fantastic time learning about what it means to be a Station Adopter with Tony and his team from Llanishen Rotary Club. It was a great opportunity for the students to get out of the classroom and learn about something that is truly beneficial to their local community. I would like to thank the entire group of volunteers at Llanishen for being such great role models, and hope that it has inspired some of our pupils to consider volunteering for the scheme in years to come.’

For more information on Arriva Trains Wales’ ‘Adopt a Station’ scheme and to become a station adopter, please visit www.arrivatrainswales.co.uk/AdoptStation or contact 03333 211202.