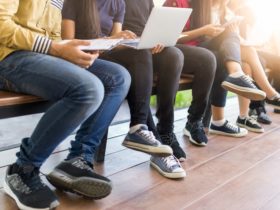 Earlier today, Mark Drakeford was announced as Welsh Labour’s new leader after securing 53.9% of the vote.

Mark Drakeford will replace Carwyn Jones when he stands down next week.

We are proud to announce the next leader of @WelshLabour is @MarkDrakeford pic.twitter.com/LCv4ET0CQY

Commenting on the election of Mark Drakeford AM as Welsh Labour Leader, Harri Lloyd-Davies, President of the South Wales Chamber of Commerce said:

“Congratulations to Mark Drakeford on his election as Welsh Labour Leader and our presumptive next First Minister. Unfortunately for him, with Brexit on the horizon and many other challenges facing Welsh businesses Mr Drakeford doesn’t have time to kick back and enjoy a honeymoon.

“Welsh firms will be looking to him to deliver desperately required transport infrastructure such as the M4 Relief Road, ensure that the whole education system focusses on developing a skilled and able workforce, providing Welsh SMEs with more opportunities to fairly bid for work from the Welsh Public Sector, and Enhancing the government’s support for growing Wales’ export base.

“We at the South Wales Chamber of Commerce look forward to working with Mark Drakeford to improve the trading environment for Welsh businesses.”

“FSB is pleased to welcome Mark Drakeford to his new post as Leader of Welsh Labour.

“We have enjoyed working closely with Welsh Government and Welsh Labour’s elected politicians for some time, and look forward to this continuing to be the case.

“Mark takes up this post at a critical time for the Welsh economy.

“Brexit uncertainty continues to prevail ahead of the UK Parliament vote on the Deal next week, and we have seen business confidence drop significantly in Wales in recent months. We have welcomed the moves by Welsh Government to introduce funding and the Brexit Portal to support businesses through the Brexit process, and will continue to work closely with the government to bolster business confidence as our exit from the EU continues to unfold.

“We are also at a crucial moment for our towns. Welsh towns and high streets are subject to increasing pressures. Following a survey of FSB members and of businesses and stakeholders across the country, some of the top issues identified included the threat of online retailing, empty shops, business rates and out-of-town development. We’ve issued a number of recommendations for change, and we are now looking to Welsh Government to be a part of a new conversation based on these trends, distinctive features and what we want our towns to be.

“There are many other pertinent issues affecting the self-employed and small business community in Wales, such as how we promote our medium-sized firms, the need to take action on how we sell Wales to the world and support that can be provided to our rural economies through a Rural Taskforce. These are all issues that must be prioritised in the new First Minister’s early time in office.

“Our message to Mark is simple; our nation’s future prosperity relies on the success of our 250,000 micro, small and medium sized companies. Together, they provide jobs and wages to over 700,000 people in Wales, provide 62% of private sector employment and generate £48bn in sales every year. With the right leadership, this contribution can increase in local economies across all of Wales.”

“I very much welcome the announcement that Mark Drakeford is to be our next First Minister and the IoD will certainly wish him all best wishes and good luck as he takes on his new role.

His in-tray is, of course, stacked high at the moment and there will be many issues that we will wish to engage with him on in the months ahead and beyond. Of course Brexit, which he has taken a lead for Welsh Government on in recent months, and the M4 relief road are top priorities for our members. On the M4 issue, we hope he will make a swift decision to back the Black Route for the benefit of business, the wider travelling public and the economy of Wales going forward.

“We look forward to engaging fully with him and his government. From a personal perspective I have been a member of the Tax Advisory Group, which he chairs in his current role, and have always valued the opportunity to work with him on the important issues that affect Wales and impact on our economy. Our working relationship has always been positive and I wish him well.”

“The Farmers’ Union of Wales has an obligation to work with all political parties and Governments of the day to secure our members’ futures, and to oppose those actions or proposals we believe would be detrimental to our industry.“Over the years our relations with Welsh Governments have delivered positive results for both farmers and governments as well as for the wider economy of Wales and we very much hope that we will be able to work with Mark Drakeford to continue this record.“There can be little doubt that the vast majority of the core objectives of the FUW and the Welsh Government have been aligned, not least in terms of protecting Welsh livelihoods, sustaining and creating Welsh jobs, and improving Welsh prosperity and sustainability. We are also closely aligned in terms of the Well-being of Future Generations Act where farming can and does play such an important role.“As we face serious challenges as a result of Brexit and also proposals to review the ways that farmers are supported in delivering for the nation, I want to remind Mr Drakeford that this Union is fully prepared to work with him and his Government to co-produce optimal solutions for Wales.”