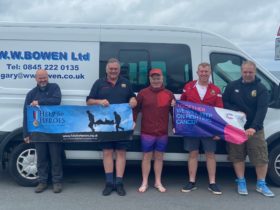 Presteigne’s historic attraction, The Judge’s Lodging, is to receive £120,000 from the Welsh Government as it moves towards becoming an independent charity.

The award-winning Victorian attraction is one of only four museums chosen by the Welsh Government’s Museums, Archives, Libraries Division to receive Transformation Capital Grants Programme support, which is open to museums, libraries and archives across Wales.

The funding will go towards a capital project to repair the roof and repaint the front of the Grade 2-star building, create a new, enhanced shop and Tourist Information Point and pay for a new audio system.

The museum’s existing much-loved, but sadly no longer functioning, Walkman system used to run a popular character-based audio tour for visitors. Recent audience research has shown just how popular this tour is, with characters taken from the real history of the building, such as Mary the maid, William Luggar the housekeeper, PC Rogers and prisoner William Morgan, all overseen by Richard Lister Venables, chairman of the magistrates, portrayed by the late actor Robert Hardy.

A decision has therefore been made to keep audio tour, but to provide new technology to access together with a Welsh version.

The museum has been busy planning for the future as a charity, The Judge’s Lodging Trust, moves towards taking the building over entirely from Powys County Council, current owner.

At the helm of the charity is chair, Diane Gwilt, keeper of collection services at the National Museum Wales and Gaby Rivers, the museum’s manager, who has been a driving force for the museum since it opened to the public in 1997.

“With the museum reaching its 21st birthday this year, this is terribly exciting news,” said Gaby. “It really feels like we are starting to forge forwards in our quest to protect this wonderful building and provide an amazing experience for visits.”

Joking about the building’s legal past, she added: “We really want to do the museum justice!”

Staff at The Judge’s Lodging cannot pretend that it is all plain sailing, as the local authority moves away from supporting the museum and they are working hard to raise funds to keep the building moving forwards. To this end, they have just opened a pop-up Welsh Tearoom, with all locally sourced teas, coffees, soft drinks and cakes, all served in vintage china.

A summer trail for families, ‘The Judge Wants His Dinner’, is running throughout the school holiday, where participants search for cunningly-hidden ingredients throughout the historic rooms and get themselves a certificate and a mouth-watering recipe sheet at the end.

There is still a few more weeks to catch the incredible works of local artist, Simon Dorrell, in Circumstantial Evidence, a series of paintings of the period rooms of The Judge’s Lodging in celebration of its 21st anniversary.

Staff and volunteers are busy in the background pulling together information for their next community exhibition, Ladies of Llanandras, which will showcase some of the town’s amazing women from its past and present.

The museum has an active volunteering programme, run by volunteer co-ordinator, Sue Knox, so if you fancy helping The Judge’s Lodging, do pop by, find out more, sign up to be part of the team or even buy yourself a nice cuppa to show your support!

Be sure to watch The Judge’s Lodging this Friday, August 3 on Weatherman Walking at 7.30pm on BBC Wales, where you will see the popular Welsh weatherman Derek Brockway visiting the building and giving his verdict.