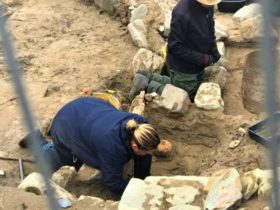 The development has been jointly funded by Neath Port Talbot Council and the Welsh Government, as part of its 21st Century Schools and Education Programme.

There were 26 weeks spent off-site at pre-construction stage so in 94 weeks the project went from a blank sheet of paper to the now completed building.

Just before handover, Bouygues UK invited years 6 and 7 to a transport test – to ensure bus drivers became familiar with their new route and the new car parking area and that pupils knew their way into school once they were off the bus.

There was an unusual challenge for the construction team at the beginning of the project when they discovered  the site was home to more than 300 Slow-worms (Anguis fragilis) – the lizards were successfully relocated to a new home before construction work could begin.

“Ysgol Gymraeg Ystalyfera is very proud of its sister campus in the south, which will aim to forge new and strong relationships with communities south of the county borough in the years ahead”.

“The new Welsh medium campus, together with the redevelopment of the existing Ysgol Gymraeg Ystalyfera site in the north, will form a key part of the Council’s plans to strengthen the provision of Welsh medium education across the county borough”.

Minister for Welsh Language and Lifelong Learning Eluned Morgan, said of the development earlier this year:

“Increasing the number of Welsh medium schools, as well as supporting English medium schools to increase their Welsh provision, is crucial to our aim of a million Welsh speakers by 2050.

“I am delighted the Welsh Government has been able to support the development with funding of nearly £11 million from the 21st Century Schools and Education Programme. It is an excellent example of what the Welsh Government is achieving by working in partnership with local government and schools.”

Ysgol Gymraeg Bro Dur will eventually accommodate up to 650 pupils aged 11 to 16.  The new school is on the site of the former Sandfields Comprehensive and Traethmelyn Primary Schools.