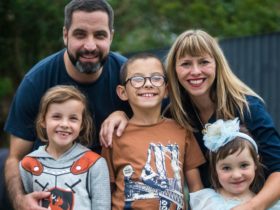 Nine Newport residents have started the weekend with an amazing surprise after learning they have won £330,000 all thanks to their postcode.

The windfall comes after NP20 6PL was announced as a winner with People’s Postcode Lottery on Saturday 11 June. Eight of the winners netted £30,000 each while the ninth scooped £90,000 thanks to playing with three tickets.

Among the winners was Dianna Waggett (41) who planned to use her winnings to pay for an overdue honeymoon.

She said: “We’ve never been on a honeymoon so I’m going to take my husband on one. Somewhere warm with a beach.

“Thirteen years we’ve been married, and we never got round to it!”

Dianna also said she’d celebrate with champagne, with a bottle that has been waiting for a special occasion to hand: “I’ve got my wedding champagne. It’s still in the gift wrapping! We got it for our wedding as a gift and we never had an opportunity to open it, so it’s in the fridge.”

The mum-of-three was left overjoyed with the £30,000 prize and added: “It means the absolute world. I can’t tell you enough how much that money is going to do my family a world of good.”

Dianna added that she would treat her three boys with the winnings and may get a treat for herself as well: “I might go on a spa day, just to compose myself and calm down!”

She added that she was thrilled to hear about her winning neighbours and said: “I think the fact that I’m sharing with my lovely neighbours, because we are like a family here, I’m chuffed to bits for everybody.”

Rebecca Holmes (31) was left lost for words after she and her partner Richard found out they’d scooped £30,000. When asked how she felt, she said: “I don’t even know, I’m shocked. Shocked is the word!”

The couple are currently getting work done on their home and said the winnings would go towards home improvements. Richard said: “We were saving to get work done on our house and this has given us a head start which is amazing.”

The pair, who are both civil servants, were married in 2020 and like their neighbour Dianna, they had an overdue trip in mind. While laughing Richard said: “We still haven’t had our honeymoon, so we could do that.”

Another winner was Andrew Churchward (63) who was left stunned with a £30,000 cheque. He said: “It’ll definitely make a difference. It will be lifechanging, to be honest.”

The maintenance technician said he plans to treat his wife, Val, with the winnings as they celebrate a special milestone later this year: “We’ll be forty years married this year, we were planning on going on a cruise but we didn’t think we’d be able to go.

The couple have lived on the street for over 35 years and Andrew said he’d be celebrating with a party for his friends and family: “I imagine what we’ll do is have a little party. I’ll organise a club for the evening and get everyone together, hopefully we’ll do that.

Tracey Powell (51) also netted £30,000. After finding out how much she and her partner Christopher had won, she described her shock and said: “I had butterflies in my stomach, it was such a strange feeling!

With her two children and four grandchildren in mind, Tracey said she plans to use the winnings to treat the family to an overseas trip: “A big holiday with everybody, my little gang here and my grandchildren.

“I fancy taking the little ones to Florida or something like that.”

Tracey, who has worked as support worker for 25 years, said the family would be celebrating the good news together as well. She said: “I might open a bottle of champagne in a minute! But we’ll organise something in the next couple of days.

“I’m a party person so there’s definitely going to be a party!”

Pearl Campbell (54) was another to receive a £30k cheque. She was joined by husband Ken when she received the good news. After the shock had passed, Ken said: “It’s a huge amount of money for us and it will go a long away.”

Pearl described the win as amazing and added that it would allow the couple to complete renovations on their home. They also had a special treat in mind. Ken said: “We’ll spoil ourselves with a nice holiday.”

When asked where they may visit, Pearl was quick to say: “Mauritius!”

The couple also plan to celebrate. Pearl added: “We’ve just had a Jubilee party and this will mean the celebrations go on!

“It was our wedding anniversary yesterday so we’ll go out for a big meal to celebrate.”

Paul McKenna (62) and his wife Jane said they planned to use their £30,000 windfall to help pay for their son’s wedding later this year.

Jane said: “We’ve got a wedding in September so some of the money will go towards that. There’s just a few extras now that maybe we couldn’t have afforded, but now we will.”

When asked if he might treat himself, Paul suggested a new pair of golf clubs might be on the cards to celebrate.

Jane added that she had a few extra ideas as well: “A new kitchen, I need a new one. And maybe a cruise!”

The couple, who have lived in the winning postcode for over 20 years, said they were stunned by the win with Paul adding: “It’s absolutely amazing. It means so much to us.”

The remaining winners have remained anonymous, but lottery ambassador Matt Johnson shared his congratulations. He said: “I couldn’t be more pleased for all of our Newport winners. What a fantastic way to start their weekend.

“It sounds like they’ve already got great ideas for the winnings with some overdue honeymoons and party celebrations already being planned. I hope they have a great time with their winnings and enjoy treating themselves and their loved ones.”

Everyday throughout the June draws one postcode will be announced as a £30,000 prize winner. All the players in the postcode will win £30,000 for every ticket they hold.

Players of People’s Postcode Lottery have helped raise over £900 million to date for thousands of good causes across Britain and internationally.

This draw was promoted on behalf of Postcode Planet Trust, which awards funding to charities providing support to wildlife and the environment. Supported charities include Marine Conservation Society and WWF.