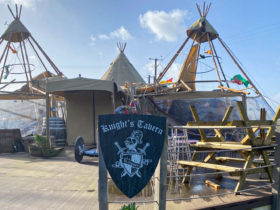 Thanks to Wales Millennium Centre, Cardiff for inviting us along to see the show in exchange for this review.

Having performed it as a school production and seen the film as soon as it came out (and being told off for singing too loudly throughout it) to say I jumped at the chance to review the theatre production of Les Misérables would be an understatement.

The hugely popular musical, based on the novel by Victor Hugo follows Jean Valjean who is released after 19 years as a prisoner. After Jean Valjean breaks his parole, he vows to change his life and do better. Eight years later and now known as Monsieur Madeline his life is very different. As the story develops, he gains custody of the child of one of his factory workers. The story sees love, heartbreak, sadness, and war with injections of humour throughout.

Awe induced goosebumps remained throughout the performance and no amount of writing could put into words how impressive and incredible it was from start to finish.

Head of Lighting and Production, Beky Parry, brought the performance alive alongside Head of Sound Eamon Walsh. Both worked flawlessly together to add new elements to the performance. During the battle scene the lighting and sound made its way through the audience surrounding all of us with sounds and the light of gunshots, adding to the feeling that you were part of the battle.

Every scene was made up of detailed sets with effective and seamless transitions between them. The second act included immensely effective special effects including moving backdrops that took the audience down to the sewers with characters as they trudged through the darkness. The same technique was used during a scene in which one jumps from a bridge, plunging down into the deep water.

All characters sang their lines throughout with many having solos. Katie Hall playing Fantine sang I Dreamed a Dream with exceptional vocal skills and not a note even slightly out of place. I found myself sat through the whole song with my mouth wide open and it was hard to believe you were hearing it live.

The ever-funny innkeeper scene did not disappoint with great acting from Ian Hughes as Thénardier the inn keeper and Helen Walsh as his wife, Madame Thénardier. Both displayed their grotesque characters well and had the audience laughing throughout their scenes.

Young Cosette played the part adorably and impressed with a beautiful singing voice and vocal range. The performance included a number of young actors, including he who played Gavroche, who stood out with his northern accent that made him a memorable character and separated him from the chorus.

With its well-known story and strong reputation the cast had a lot to live up to and vocal expectations were high. Despite this, every actor sung without wavering and you could only feel they had been born to play their role.

By the end of the performance my hands were sore from clapping so much and still, it didn’t feel like I was showing my appreciation enough.

If you haven’t already experienced Les Misérables in film or on stage now’s your chance. This is definitely not one to be missed and, I cannot stress enough, you will not be disappointed.

Les Misérables can be seen at Wales Millennium Centre  Cardiff, until Thursday 16th January 2020. Tickets are available from the Box Office (029) 2063 6464 or click here.