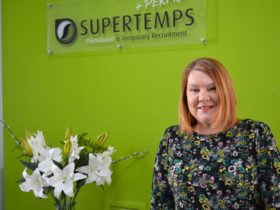 WHEN a Mold mum-of-three found herself in the middle of a health crisis, little did she know it would eventually lead to her setting up her own catering business.

From being an active mum, Elaine’s weight began to plummet, and she suffered from continuing side effects and anxiety.

“My problems began shortly after I had Ryan. I had a permanently upset stomach, my weight was down to 6st 12lbs, I couldn’t put weight on and I’d gone from being an outgoing person to being anxious. I didn’t want to talk to anyone and all I wanted to do was hide away. I just knew I wasn’t well,” said Elaine.

Desperate to find a solution, Elaine began doing her own research and discovered gluten – a protein found in wheat, rye, spelt, and barley — might be the cause. She removed it completely from her diet and after eliminating it for a few months Elaine’s health started to improve.

Elaine explained: “My own research kept taking me back to gluten and, after talking it through with my doctor, we decided to remove it from my diet. I felt physically different, my health started to improve, my mind and physical wellbeing altered for the better and I slowly began to gain weight. But it became apparent that gluten is in a lot of things, but the range of gluten-free products is quite small. Those treats that we often take for granted, such as cakes and puddings, weren’t as nice and there was little in the way of fresh bakes available, so I began making my own.”

Through trial and error, Elaine worked her way through different recipes to come up with a range of gluten-free treats.

Cross-contamination in businesses worries Elaine when she eats away from home as the smallest amounts of gluten can make her side effects return. This encouraged her to have a dedicated kitchen where there are no risks of cross-contamination of other grains. She’s now launched her own gluten-free bakery, Delaney’s Gluten Free Bakehouse, and supplies fresh cakes, pastries and desserts to businesses and the general public in Flintshire.

“I could see a gap in the market for fresh produce and already we’ve had places such as The Olive Tree in Mold agree to take my produce. It is early days but this year I’ll be growing the business, taking my products out and showing that gluten-free doesn’t mean taste-free,” added Elaine.

Elaine’s husband Paul and her three children, Olivia, 13, Joseph, 10, and Ryan, 8, act as official taste-testers for the growing Sychdyn business. They’ll be supporting Elaine when she attends Mold Food and Drink Festival in September – her first food show.

John Les Tomos, chair of Mold Food & Drink Festival, said: “The festival is into its 13th year and one of the things we are most proud of is being able to showcase up and coming new, businesses, such as Elaine’s. It is heartening seeing produce being both made and stocked locally, and we look forward to welcoming Delaney’s Bakehouse to the festival.”

Mold Food & Drink Festival will be held on Mold’s New Street car park on September 15 and 16.