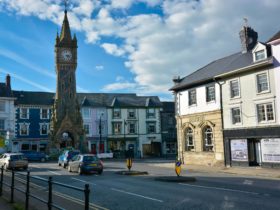 The daughter of the late Rev Wilbert Awdry, author of the famous ‘Railway Series’ which included Thomas the Tank engine, has spoken of her pride after attending the second ‘Awdry Extravaganza’ at Talyllyn Railway last month.

Veronica Chambers attended the weekend event, organised to celebrate her father’s work, with her grandson and great grandchildren.

The Rev. Awdry was an Anglican priest and railway enthusiast who became an enthusiastic member and volunteer guard on the Talyllyn Railway in 1952.

His  experiences inspired him to create a fictitious Skarloey Railway, which became the subject of an additional series of books within his ‘Railway Series’.

“To be present at this Extravaganza at the Talyllyn Railway was a real privilege,” said Veronica. “To see in action the still passionate interest and enjoyment of so many diverse people, of all ages and from different parts of the world, united by their love of Wilbert’s stories and the Skarloey Railway, was immensely moving.

“For me it was an incredible and often humbling experience….to meet a lad whose time in hospital after two big organ transplants had been transformed by the stories, the one who had found the courage to become a volunteer.

“Others told of firm friendships made over the miles through shared interest, those who remembered meeting Wilbert himself, or Christopher and those who had travelled from the States.

“Father would have been amazed and delighted to think that his stories, based on his beloved Talyllyn Railway, touched, and still do, so many people for good. My family and I are immensely proud.”

Building on the success of the first Awdry Extravaganza in 2021, this year’s event was organised by Luke Ryan, himself a ‘Railway Series’ expert.

“We were blown away by the reception that the event received in 2021, so we knew that we were on the right track,” he said. “This year, we introduced some new special services, such as a photo charter and ‘The Picnic’ train, which both sold out amazingly fast.”

This year’s event attracted nearly 50% more revenue and attendees and increased its online presence, with more than 5,000 people watching the livestream and 230 buying tickets for a lecture by railway historian, Tim Dunn which was broadcast live.

Talyllyn Railway’s general manager, Stuart Williams, said: “This year’s event exceeded our expectations and delivered record breaking sales in our shop, as well as attracting a diverse audience of visitors which came specifically for the event from as far away as Nashville in the USA”

Planning for next year’s event has started already, with a date being announced soon.