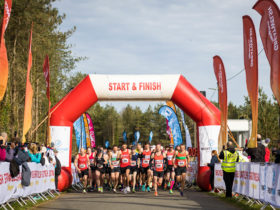 The Great Welsh Marathon returns with a bang

Britain’s biggest indoor motorsport event is set to make a blockbuster return to Cardiff’s Principality Stadium in 2022, celebrating its 20th year in the Welsh capital.

Fast and furious family fun, The FIM British Speedway Grand Prix will take place on Saturday 13th August, with a host of celebrations planned to mark the occasion.

The special anniversary event was due to take place two years ago, but was forced to postpone because of the pandemic. However, the British motorsport event is coming back this summer, bigger and better, and will include a secondary event on the Sunday.

With three British riders in the World Championship Series this year including three-time World Champion Tai Woffinden who is eager to secure his first ever home win at Cardiff, the stage is set for some thrilling on track action as fans gear up to watch 16 riders – 15 permanent and 1 wild card – compete over 23 heats; four riders over four laps on 500cc bikes with no brakes!

Enjoying the highs, extraordinary skills and nail-biting moments as riders compete wheel to wheel for the chance to win one of the most prestigious events in world speedway and move one step closer to the World Championship, past winners and legends of the sport including Tony Rickardsson, Greg Hancock, Chris Holder, Jason Crump and Nicki Pedersen will also be heading to Wales to soak up the celebratory anniversary atmosphere.

The day starts in the activity-filled fanzone which will take place outside City Hall and feature a jam-packed schedule including rider autograph sessions, photo opportunities and plenty of interactive activities.

Racing will start in the stadium at 5pm and culminate with a spectacular indoor firework display.

For the first time, action will also continue on Sunday as the Principality Stadium hosts the FIM SGP2 of Great Britain – the second round of the revamped FIM Speedway Under-21 World Championship, with entry included in the FIM British Speedway GP ticket price.

As the longest running third party event at the Principality Stadium, the motorsport has become synonymous with Cardiff and speaking ahead of this year’s SGP Paul Bellamy, chairman of Sidetrack Ltd, which runs the FIM British Speedway GP on behalf of Discovery Sports Events said:

“This will be our first event for three years and we’re determined to celebrate this and our milestone 20 years in style.

“As well as the full throttle on track action, there is so much planned to mark the occasion and we’re expecting bumper crowds across the weekend, especially as we now have two days of race action for fans to enjoy.

“With the Wild Card being decided from the result of British Championship, we’ll actually have four British riders on home soil which will be great to see.

“Cardiff is always a fantastic showcase but this year promises to be bigger and better than ever and we’re looking forward to welcoming fans old and new to the Principality Stadium; it’s just fantastic to be back.”

Tickets are on sale now at fimspeedwaygpofcardiff.seetickets.com