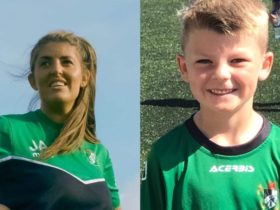 A swimming lifeguard from Swansea just missed out on a medal at an elite surfing competition.

Isaac Heaher finished fourth in the Kneeling Class won by his Wales team-mate Llywelyn Williams, from Abersoch, at the Welsh Adaptive Surfing Championships at Adventure Parc Snowdonia in the Conwy Valley.

Isaac, who only took up surfing three years ago after he visited the Surfability site on the Gower Peninsula, was impressed by the venue at Dolgarrog, on the edge of the Snowdonia National Park.

The keen swimmer was born without a thigh bone but has not that keep him out of the water and he has taken part in the British National Championships and been picked alongside Llywelyn for Wales in the Para Surfing World Championships.

Isaac, who has visited the wave pool at Adventure Parc Snowdonia several times, said: “It’s a great place to compete or just surf. The waves are really good and the facilities are first class. It’s more like the sea than other similar centres.

The teaching assistant at a Swansea secondary school enjoys competition and added: “I’m really grateful to the school authorities for allowing me the time off.

“I began surfing at Caswell Bay three years ago and loved it.”

Isaac was among 20 competitors at the Welsh Adaptive Surfing Championships, including entrants from the USA, France, Israel, Wales and England at the man-made lagoon on the former aluminium smelting site.

It was the world’s first inland venue to host an adaptive surfing championship event three years ago and organisers Adventure Parc Snowdonia were pleased to have the adaptive surfers back – it’s for those with additional needs or challenges – and its proved a big hit with the boarders.

The driving force behind the event has been Llywelyn Williams, 27, from Abersoch, whose own dreams of becoming a competitive surfer began on the beaches of Porth Ceiriad and Porth Neigwl in Gwynedd.

Those dreams were dashed by a horrific accident when he was 11 which cost him a leg but continuing with his sport has been just another challenge to be overcome and he was back in the water in less than a year.

He said: “At the US Open championships I wrote on a piece of paper asking if anyone would like to take part in a Welsh championship and more than 40 people said they would love to come.

“I set about organising it and we had a very successful event here at Dolgarrog three years ago but then Covid happened and put a stop to everything and this year we were back again and there were 20 athletes here taking part in the championships.”

Adventure Parc Snowdonia Head of Marketing Iwan Phillips said: “It was a privilege to welcome the adaptive surfers back to Snowdonia, their incredible spirit and cameraderie highlighted the very best of surfing and how sport truly brings people together for all the right reasons.

“For us hosting this event showcased the benefits the controlled environment we have with our facility alongside our ambition to make surfing and outdoor activities accessible and inclusive to people of all abilities or confidence levels.”

The main sponsor for the event was The Mailing Room, a Bury-based family company with an interest in adaptive surfing. AmpSurf, an organisation set up to inspire and rehabilitate people with disabilities, and Llywelyn’s family company, Hopalong Clothing, also supported the event.