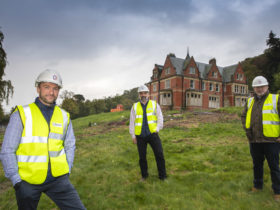 TWENTY-THREE of Wales’ most impressive and community beneficial property schemes battled it out for top honours at the RICS Awards 2019, Wales, last night (Wednesday 1st May), where Llwyn Celyn, Abergavenny – one of the earliest surviving domestic buildings in Wales – took the overall ‘RICS Project of the Year, Wales’ title.

The annual RICS Awards, Wales – held at the Exchange Hotel, Mount Stuart Square, Cardiff on Wednesday night – celebrate inspirational built initiatives in Wales, and the skills of the teams behind them, across eight categories.

A remarkably little-altered medieval hall house built in 1421, Llwyn Celyn sits at the entrance to the Llanthony Valley whose Priory is further up the valley. The £4.2million restoration of Llwyn Celyn saw the rescue of one of Wales’s most at risk lived-in buildings. Using traditional methods, it has been restored as a ‘Landmark’ for up to eight people and also won the night’s Building Conservation Category.

RICS judges praised those behind the project – Donald Insall Associates, The Landmark Trust and I J Preece & Son – saying that the conservation of Llwyn Celyn has clearly been led by a team that properly understands its history and heritage and how to present it today.

Judges continued: “Based on well-researched heritage values, including the main stays of good conservation practice of minimum intervention and honest repairs, this is a project that provides a model for teaching others what excellent conservation looks like. The quality of work, which is outstanding, hugely contributes to this and shows the workmanship that should be expected on all projects, but all too often is not achieved, even in conservation work.”

The winners of all eight categories were announced as:

A Highly Commended certificate was also handed out on the night to Loftus Garden Village, Newport in the Regeneration category.

Chair of the RICS Awards 2019, Wales judging panel, Geraint Evans, commented: “A diverse range of innovative projects, of all sizes and budgets, made the shortlist this year and the winners are truly representative of Wales’s best and most innovative built projects that are having a significant positive impact on their communities. The teams behind these winning projects should be very proud of their exceptional achievements and contribution to Wales.”

All category winners will go on to compete against other regional winners at the national RICS Awards Grand Final on Friday 4 October at the Royal Lancaster Hotel, London, for the chance to be crowned the overall UK winner in their respective category.