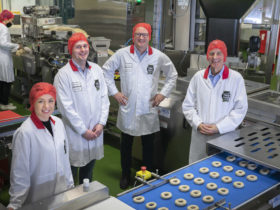 Europe’s biggest trailer maker is looking to train and recruit 20 new welders to cope with a bulging order book.

Ifor Williams Trailers has joined forces with the leading commercial training company, Gatewen Training Services, who are based in Wrexham.

Jobseekers are being invited to a training and recruitment day at the newly-opened arts centre, Tŷ Pawb, in Wrexham on Thursday, August 23.

The would be welders will be able to apply for a place on the five-week training programme that will be run by Gatewen Training Service, an associate company of gap Personnel. The first course starts on September 3.

On completion of the programme, up to 20 successful candidates will be offered jobs with Ifor Williams Trailers which is celebrating its 60th anniversary this year.

The iconic Welsh brand was established in 1958 in Cynwyd, near Corwen, where it still has a factory.
The firm also has manufacturing sites in Corwen, Ruthin and on Deeside Industrial Estate.

Last year it opened a new £5 million production facility in Sandycroft, in Flintshire, to create extra capacity.
The company employs more than 500 people across all the sites.

As well as having a network of 50 UK trailer outlets, the company has Distributors as far afield as Australia and New Zealand – and sells its trailers as far afield as Russia, the former Soviet republic of Georgia, the West Indies, Japan and Africa.

Ifor Williams Trailers is the leading manufacturer of braked trailers in Europe with Scandinavian countries like Norway and Denmark being growth areas.

“Through our comprehensive range of commercial training programmes and the relationships we have with employers, we are proactively encouraging jobseekers of all ages to gain the skills, qualifications and onsite experience required to access careers in the engineering sector.
“We are delighted to be working with Ifor Williams Trailers, one of the most respected and successful manufacturers in the UK, to boost employment and address skill shortages in North Wales.”

“We are very much looking forward to commencing onsite training at our manufacturing facility in Corwen and giving 20 successful candidates the chance to secure a prosperous career here at Ifor Williams Trailers.
“We look forward to meeting prospective candidates at our launch event in Tŷ Pawb on Thursday, August 23.”
“We are looking for people who will buy into our ethos of producing high quality trailers that combine high technology with strength, durability, ease of maintenance and value for money.
“As specialists in trailer design and engineering, we have continued to set the standard both in the UK and throughout much of Europe and across the world.
“It’s important that we recruit the right people so we can continue to set the benchmark as trailer manufacturers.”