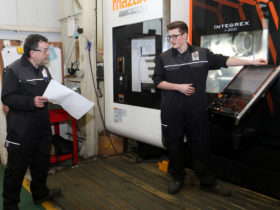 Hot on the heels of launching Wales’ first Aquavit, Monmouthshire-based Silver Circle Distillery recently invited a host of aspiring and professional mixologists from across the South West to come up with the perfect Aquavit cocktail – or ‘signature serve’.

On April 5th, ten finalists competed in person at Lab 22 in Cardiff, a fitting venue which was recently named Best Cocktail Bar in the UK at the Top 50 Cocktail Bars Awards.

Of the inspiration behind his cocktail, Matt said, “Silver Circle Aquavit undoubtedly reminds me of the sea, I couldn’t stop thinking it as the pinnacle of fresh Scandi/Welsh hiking and outdoor experiences. Crisp, bright and refreshing, my cocktail was designed to take in these aspects, and blend them with a little dog walking foraging on the Welsh coast!”

Louie explained, “To tie the drink to its Scandinavian origins I looked into the concept of ‘Hygge’, that cosy warm feeling you get when you’re by a fire with a blanket and a coffee. The Welsh have their own version – the cwtch, the closest English translation meaning cuddle, but also closely tied to that feeling of cosy-ness and comfort. Hopefully, when the judges tasted my cocktail, they found watermelon and raspberry notes mixing with the darker coffee, cardamon, caraway and fennel, to give a melting pot of hygge and cwtch together.”

Of his creation, Seb said, “The freshness and herbaceous nature of the Silver Circle Aquavit made me think about my childhood and the herb gardens that my relatives in Sicily used to look after – I wanted to build on this. My cocktail is essentially a curious riff on a Martini which marries the savoury notes from the Aquavit and Black Garlic Vodka alongside a Bristolian vermouth, which builds upon several of the Aquavit’s flavour notes. My own hand-brined Sicilian Nocellara features in the serve, and the white bunny tail garnish tied to the stem of the glass symbolises the fletching of an arrow – giving relevance to its name, The Silver Arrow.”

All three of the judges were ‘blown away’ by the standard of mixology and the imagination shown by the contestants; all three winners walked away with bottles of Silver Circle Aquavit, and the first-place winner will also get to visit the distillery to make his very own batch.

Duncan from Silver Circle said, “The level of skill and creativity shown by the finalists was absolutely stellar. We felt incredibly lucky to be presented with such a variety of styles and drink serves, – it was very difficult to choose a winner!

That being said, Matt (Welly) from Lab 22 created a drink that ultimately won our hearts; a modest, yet creative list of ingredients that worked perfectly with our Aquavit, his cocktail had a clean aesthetic and most importantly, was absolutely delicious.

We would like to thank all of the entrants that took part in the final. It was an honour to have had such a talented selection of bartenders working with our products!”