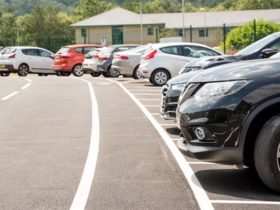 Council secures £13m of funding for Highways and Transportation schemes

Two Gwent businesses have been given a major boost by Tata Steel subsidiary UK Steel Enterprise.
[aoa id=”1″]
V3 Apparel and Menu4Life have won free tenancies for fixed periods at the prestigious Ebbw Vale Innovation Centre (EVIC), owned and run by UKSE.
The locally-based companies won the prizes against strong competition. V3 Apparel will have a free office for a year, and runner up Menu4Life will have six months at EVIC.
Their successful submissions demonstrated potential to grow and create lasting jobs.

“We had a good number of entries for the competition and were delighted with the standard.
“We are very pleased to welcome these businesses to EVIC and we are confident they will benefit from being part of the business environment here.”

V3 Apparel is run by brothers Michael and Nicholas Pinocci. They design and  produce fitness clothing designed to encourage and motivate the wearer. The idea was born when Michael, a former Lance Corporal in the Army, had to leave the forces after an accident.
As he struggled to get back to peak fitness, Nicholas realised that clothing bearing a motivational message could help his brother’s training process.
The business is growing rapidly with British and international sales, 60% of which go to the US. Michael is delighted at their new home at EVIC. “It is great for networking and meeting other businesses. The place is a creative hub where we can bounce ideas around.”
Menu4Life was runner-up, gaining a six month tenancy. The company’s four directors have over 50 years’ experience in the field of non-medical, preventative services covering emotional, physical and nutritional well-being.
The firm’s principals have a track record in delivering these holistic services through the Communities First programme, which closed recently.
Mikka McDonald of Menu4Life said she was delighted to be based in the Innovation Centre. “We wish to expand and enhance our business, and an office at EVIC will give us the additional kudos we need to sell ourselves and expand our customer base.”
The firm will work with schools, community groups and a wide range of organisations to support the local community.
This is the second time EVIC has run a competition of this kind. In 2015 computer game designer Squarehead won an EVIC office for a year, helping the young business move forward.
EVIC has been hailed as a great success since its launch in 2004 and expansion in 2010. It has been home to hundreds of growing businesses and been a leading stimulus for the local economy.
The development set a new benchmark for business accommodation when it was opened by Neil and Glenys Kinnock.
Since then it has enjoyed high levels of occupancy and become an important feature of the business landscape. Tenants have enjoyed the freedom of flexible arrangements, and praised its features which include 40,000 square foot of space a mixture of offices and workshops, fully equipped meeting rooms, excellent security, serviced reception, 24 hour access, super-fast broadband, and a gym and sauna complex for the tenants.
Topics: Tata Steel UK Steel Enterprise
0 Shares
Share on Facebook Share on Twitter Share on WhatsApp Share on WhatsApp Share on Linkedin Share on Email
Rhys Gregory September 14, 2018