A pub landlord and landlady from Aberdare are looking forward to splurging on a cruise to America thanks to winning £355,683.80 after they matched the five main numbers and one Lucky Star number in the EuroMillions draw on Friday 6 July.

David (62) and Penny (59) Bradley have worked in the pub industry for more than 30 years, and currently manage The Bute Arms in Aberdare where they plan to celebrate their wonderful win.

[aoa id=”1″]The married couple love working at the pub and being part of the community, so have no plans to retire early after their big windfall. Instead, the two will enjoy their winnings by taking more holidays, including a fun-filled cruise and holiday for Penny’s 60th birthday that will take them around the United States, to Boston, New York, Orlando, Miami and Las Vegas.[/aoa]

“I had a ‘Del Boy moment’ in the car when I realised I’d won and celebrated at the wheel! We are overjoyed to have had such a big win.

“The money will of course help us have a more comfortable retirement when we do finally hang up the aprons, but for now we will continue doing what we love and enjoy a few holidays while we’re at it!”

“We already had a holiday booked this October for my 60th birthday, but with this win we can enjoy it that much more. Vegas is one of the stops, so winning on EuroMillions means we can have a bit more fun, and maybe even book to see Rod Stewart in concert!”

Prior to working at The Bute Arms, the Bradleys worked at the Victoria Park in Canton, Cardiff, for eight years until fate brought them to Aberdare in December 2016. If it wasn’t for this turn of events, the couple would still be buying their tickets in Cardiff.

“We were really sad to say goodbye to our great team and loyal customers in Cardiff. However, if we hadn’t come to Aberdare, we never would have bought our lucky ticket, so I guess Lady Luck looked down on us and it was fate that made it all happen.”

As well as being Publicans, David and Penny are keen fundraisers and regularly hold charitable events to raise money for a number of different causes, including fundraising to buy defibrillators for the community.

“Fundraising and donating to charity is a big passion of ours as we think it is so important to help worthy causes and give back to the community. Just recently, our quiz master’s sister fell ill and was taken to Prince Charles Hospital. We wanted to show our appreciation to him and the hospital and managed to raise more than £560 in three days to help buy fans for the wards.

“David has always played Lucky Dips. He says he can’t be bothered to fill in the numbers on the form. When I found out we had won by having five plus one Lucky Star, I laughed and joked he was useless for not getting that last number!”

The Bradleys have been playing the lottery for as long as they can remember and got their winning ticket at Aberdare Post Office, around the corner from the pub where they work.

“When I checked my numbers, the National Lottery terminal win sound went off and I knew that meant we had won a big amount and had to call Camelot. Initially I thought we had won about £30,000, but never in a million years did I think we’d won ten times that. I was in my car when I phoned Camelot and was in absolute shock.”

“When David came back to the pub he said he wanted to talk to me in the cellar. He told me we had won the lottery and when he told me how much I just couldn’t believe it. I was in shock and couldn’t move. The girls at the pub had to sit me down because I went white and even up to the point the Camelot Winners’ Advisor came to see us, I thought it was a hoax.

“It still hasn’t really sunk in to be honest. We already have our ticket for this weekend’s draw!”

The National Lottery changes the lives of winners like David and Penny Bradley as well as communities across the UK – players raise, on average, around £30m for National Lottery-funded projects every week. 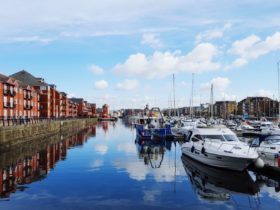