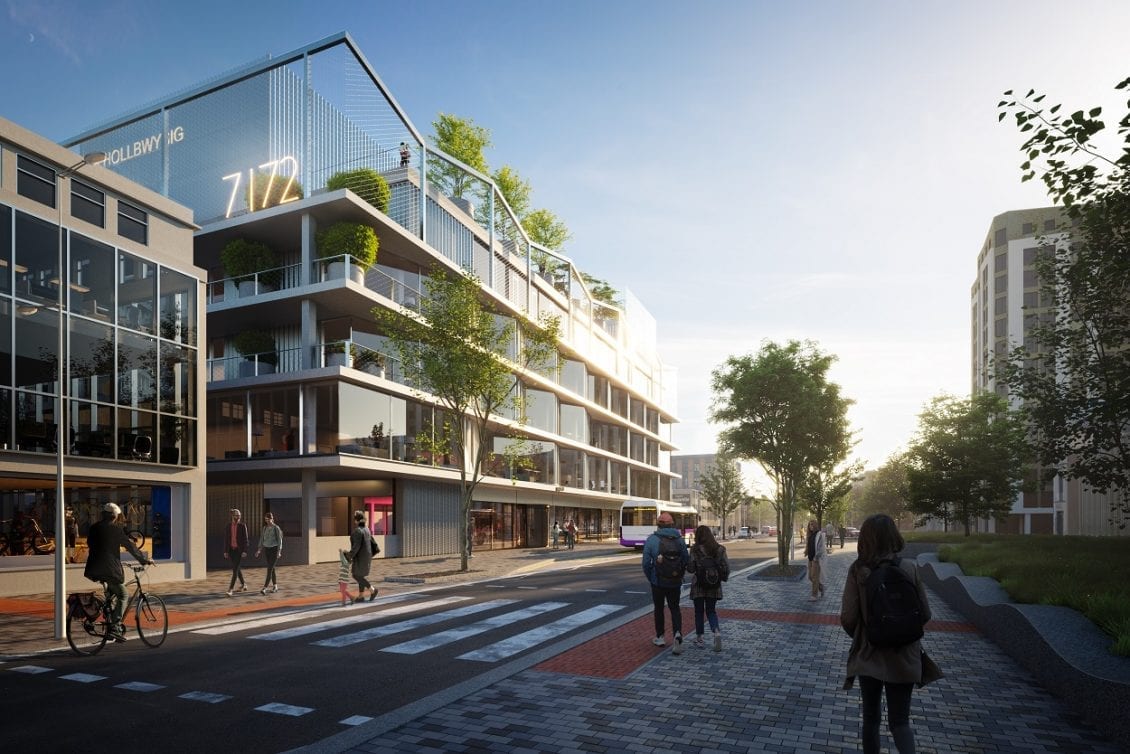 SITE investigation works have started on the £50m construction project that will help regenerate the High Street area of Swansea city centre.

The 17-story development planned for the Mariner Street car park site, opposite the railway station, will include purpose-built accommodation for 780 students above a number of shops and other businesses on the ground floor.

Developer RDE Silex and their development partner Fusion Students are behind the scheme, with support from Swansea Council.

The site investigation is taking place for three weeks, city planners having approved the project’s plans on October 2. Construction work is due to start soon and the facility is set to open for the 2021-22 academic year.

Standing 60m high and accommodating a mix of clustered flats and self-contained studio rooms, the tower, with a sloped roof, will be Swansea’s second tallest building and among the tallest in Wales.

A new public space will be introduced in front of reception and pavements will be widened.

“This exciting privately-funded project will help the transformation and regeneration of High Street build on the success of the urban village and other recent success stories in the immediate area.

“It will complement the £35m transformation of the neighbouring Oldway Centre which, from next September, is due to be home to more than 550 students.

“High Street is a key city centre gateway so the Mariner Street scheme is crucial as we transform our leisure, recreational and retail offer by significantly increasing the number of people who live and work there.

“High Street is already benefitting from the fantastic work being done by a number of innovative ventures and independent businesses.

“Thousands more students are choosing to come to Swansea due our growing, successful and highly respected universities. We need to ensure there is sufficient purpose-built high-quality student accommodation in the city centre to prevent family homes being converted to houses of multiple occupation.

“Students provide a significant economic boost to the local economy and having more people – including professionals and families – living in the city centre as well as more high-quality jobs in the city will generate more opportunity for business, create more vibrancy and help attract more investment in future.

“As well as new student accommodation, there are other new homes to come, such as the Kings Buildings project overlooking Kingsway Circle.”

Andrew Robinson, of RDE Silex, said: “We are excited to be working with Fusion and Swansea Council to develop this high-quality scheme.

“The scheme will offer students a vibrant mix of purpose-built accommodation and a strong retail offering. There will be excellent access to High Street, the city’s university campuses and transport links. Furthermore, local businesses should get a real boost from the increased footfall and opportunity.”

Fusion Students has developed a portfolio of vibrant places in key student cities including Cardiff, Bristol, Nottingham and Newcastle.

Michael Lampard, director of Corstorphine + Wright, said: “We are delighted that this 17-storey tower has been approved by the city’s planning committee.

“This will be a significant landmark for Swansea. We have partnered with Fusion Students on a number of successful, high-profile student residential schemes in major UK cities and know that this development can further contribute to the regeneration of High Street and the city of Swansea.”

During the site investigation work sections of the Mariner Street car park will be closed in phases.

Elsewhere in the city centre – on land between the LC, Tesco and Castle Square – preliminary work has started on the £120m Swansea Central Phase One, including 3,500-capacity digital indoor arena, parkland, shops, restaurants, homes and parking.

The Kingsway is being transformed into an urban park with two lanes of traffic and a digital village for tech businesses which will bring new jobs. Castle Square is in line for a new look which will bring more greenery.