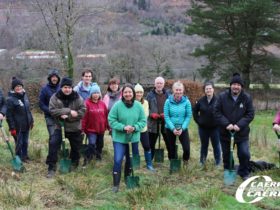 5,000 trees to be planted to mark Tree Planting Week

Project staff usually come in the form of humans – but that isn’t always the case, as the Celtic Rainforests Wales LIFE project uses the services of Connor, a black Highland steer, as an essential member of their team! Working with a pair of red Highland cattle, known as ‘The Twins’, the three have been grazing the RSPB’s Coed-y-Parc site in Dolgellau, and recently moved to RSPB’s Coed Garth Gell reserve inorder to improve the conservation status of these internationally important ancient oak woodlands.

These woodlands have a long history of grazing, which has led to the development of many of our most valuable and wildlife rich habitats. In the recent past, too much grazing had damaging effects on vegetation, and woodlands were fenced off in order to exclude graziers altogether. However, having little or no grazing within the woodlands can eventually have undesirable impacts, namely a dramatic increase in bramble, ivy and bracken – too many of these and they become over dominant in the ground layer to the detriment of other flora including the precious lichen and bryophyte assemblages of these magnificent woodlands.

It is now acknowledged that conservation grazing is a very effective tool in managing native woodland habitats. The National Trusts’ Dolmelynllyn Estate in Ganllwyd has had great success in restoring their woodland by using Highland cattle over recent years, and the Celtic Rainforests Wales project hopes to replicate this success at further carefully chosen sites across the project area. However, keeping grazing animals on sites comes with its own challenges – it often involves having a small number of animals ranging over large areas, so a lot of time can be spent simply looking for them, as well as monitoring their impact on the vegetation! There is also a need to ensure a balance of leisure use, livestock, and the wildlife that calls it home, for the benefit of all.

“I’m thrilled to see the first cattle reintroduced as part of this project, and they’re already having a great impact. The Highlands are a native British breed, well suited to the local climate and the steep, rough terrain. They are generally calm and docile on sites with public access, but we remind all visitors to give them plenty of space, and those with dogs to manage their pets appropriately. If you spot our livestock on a visit, why not tag us in your picture @coedceltiadd?” 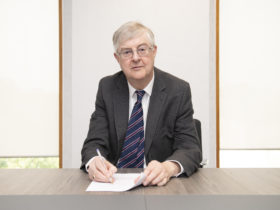