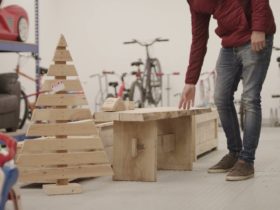 Would you believe the bargains on offer at Tip Treasures?

Huw Pendleton was the Club’s guest on Wednesday 4 September, at the Pembrokeshire  event, where he shared his insights into the successes of Celtic Holiday Parks, as well as his views on the blossoming of the tourism industry in Wales.

During his time at Celtic Holiday Parks, the business has prospered. It recently underwent the £1.3m redevelopment of the central facilities building at Croft, which now includes a saltwater hydro active swimming pool, health, beauty, and gym and Charlie’s restaurant and bar, named after Huw’s late grandfather. The breakfast gathering was sponsored by Parkwall Caravans.

Alan Brayley, Acting President of Swansea Bay Business Club, said: “I was very pleased to welcome Huw to the Club’s breakfast event in the heart of beautiful Pembrokeshire. Huw’s  in-depth knowledge of the leisure sector, which is such a key part of our regional economy here in the Swansea Bay region, was of particular interest to our members in Pembrokeshire.

“Since he is very involved in both local and national trade associations Huw brought wider industry insights to the table, as well as some interesting ideas for the further development of the tourism industry in Wales, which is only going to become more important to our economy in the years ahead.

This breakfast event was sponsored by Parkwall Caravans. Tickets for the next Swansea Bay Business Club lunch, with Anne Adams-King, CEO of Welsh Cycling, which goes ahead on Friday September 20, are available here: https://www.swanseabaybusinessclub.com/events/september-lunch-3/ priced at £25 for members and £32.50 for non-members. This event will be sponsored by Cycle Solutions.