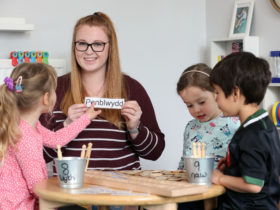 The first cohort to ever complete exams at the £14m facility achieved an overall pass rate (A*-E) of 98%.

Part of Coleg Cambria, the post-16 education hub opened in 2016 and is one of the most innovative further education centres in the UK.

These inaugural results – including an overall pass rate of 97% at AS Level – lay down the marker for future generations, according to Chief Executive David Jones.

“It’s heartening to see such positive results after such a short space of time, it’s really quite a special achievement,” said Mr Jones.

“We knew when we opened this modern facility that students learning here would have access to the very best technology in comfortable and cutting-edge surroundings, and the results already show that.

“Of course, while the building itself gives them the very best platform to succeed, it is down to their hard work and the unrivalled expertise and dedication of our staff.

“I wish all of the students the very best of luck for the future, this is a benchmark that will be difficult to beat, but at Coleg Cambria we always strive for better and will aim to do so.”

Among the delighted debutants was Arnold Gupta, who earlier in the year received the Special Award for Academic Excellence and Deeside Sixth Student of the Year prizes at Coleg Cambria’s Student Awards, headlined by former Wales and British Lions rugby captain, Sam Warburton.

He plans to take a year out before studying Maths at Warwick University, having achieved three A*s and one A.

“I feel so relieved, the exams were very hard but the support from the college has been incredible, whether that be studying at home or here in Deeside, where the facilities are just brilliant,” said Arnold, formerly a pupil at St David’s High School, Chester.

“It’s been a hard two years but so worthwhile and I’m looking forward to taking some time out now to travel and see what the future brings as I have so many interests and maths is a wide field with so many opportunities.”

Charlie Greenall, previously with Argoed High School, will also go on to study Maths at Durham University having received three A*s and one A.

“I was not sure what to expect and I honestly believe it could have gone either way so I’m really happy,” said Charlie.

“I would eventually like to go on and do a PhD but for now I’m going to enjoy the moment.

“Coleg Cambria was absolutely brilliant, the support was amazing and I would like to thank them so much for helping me.”

Among the other learners celebrating were Eden Pickering (four As), Ethan Farren (one A* and two As) and Niamh Andrews, who received four A*s and will now study Chemical Engineering at Manchester University.

“I’m happy and shocked, it hasn’t sunk in yet,” said Niamh.

“I can’t wait to go to university to explore what areas interest me most with a view to my career in the future.

“I could not have asked to learn in a better building with better teachers, they’ve been brilliant.”

Alex Thomas, Head of Deeside Sixth Form Centre, echoed those words, and added: “I’m really proud of the team and the students, their hard work has definitely been recognised.

“We’ve had a lot of cards and comments from the students about how we’ve supported them academically, socially and with regards employment in the future, which is so lovely to hear.

“It’s really been a positive two years since the centre was opened and the challenge now is to continue to develop our performance and aim to become one of the best A Level providers in the country.”